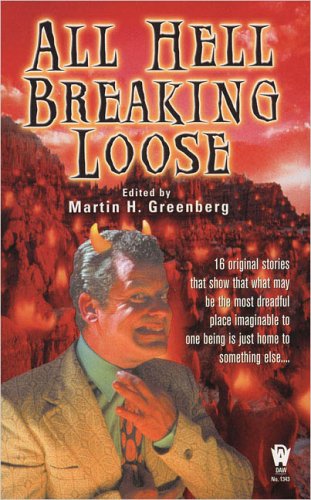 In this collection, sixteen authors tackle all things Hell-related and demonic, with stories that purport to tell it like it really is Down Below. From the humorous to the horrific, they’ll give you a little taste of Hell to savor for your very own.

In Bradley Sinor’s “That’s What They All Say,” a private investigator used to handling the unusual is tapped to deliver the ransom for a kidnapped Lucifer, but will he be tempted to welsh on the deal when he hears what is at stake? In Sarah Hoyt’s “Something Worse Hereafter,” a pair of lovers fight daily against a host of hungry demons, preferring the Hell they know to the worse one rumored to exist if they fail. Adam Stemple takes a look at the traditional deal with the Devil, when a home remodeling crew breaks down the wrong wall in “Burning Down The House.”

Daniel M. Hoyt’s “Devil in the Details” shows that even the Big Bad can be thwarted by bureaucracy and red tape, while Donald J. Bingle uses the fine print to capture the souls of the unwary in “Hell To Pay.” P.N. Elrod speculates on the nature of a convention for demons, featuring her magical cat-man Myhr in “The Name of the Game.”

Those are just some of the cautionary tales to be found in this volume, with other authors including Alexander Potter, Ed Gorman, Dean Wesley Smith, David Niall Wilson, Alan Lickiss, and David Bischoff. It’s a fun bunch of stories, with a little something for everyone, and worth checking out. 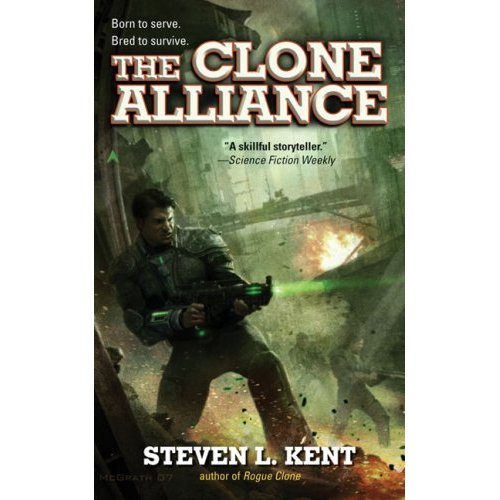 In the far future, war has broken out across the arms of the Milky Way Galaxy, as the Unified Authority fights against the secessionist Confederate Arms Treaty Organization and the fanatically religious Morgan Atkins Believers (or Mogats). Caught in the middle of this galaxy-wide conflict is former UA soldier and occasional war hero, Waylon Harris, the only Liberator-series clone known to still be alive. Waylon, fully aware of his clone status unlike the millions of other clones populating the UA armies, has, over the course of his adventures, become a rebel and a wild card. When he and his sometime partner, the mercenary Ray Freeman, got stranded on a distant planet, it looked like that was the end of the war for them both. That wasn’t to be the case for long.

Following a suicidal attempt to return to civilization at all costs, Harris and Freeman are once again drawn into the thick of things, used as a go-between for the various warring factions, which ultimately sends Harris right into the very heart of the Mogat empire. There, on an inhospitable planet, surrounded by millions of the enemy, he discovers their closely-held secrets. Little does he realize he’ll soon participate in a massive military attack upon the Mogats, a campaign which will once again test his morals and resolve. For Waylon Harris, it’s never dull.

The third book in the series, The Clone Alliance once again offers up stunning battle sequences, intriguing moral quandaries, and plenty of unexpected revelations. We see some pretty major developments in this book, especially related to the secret of the Mogats and their technology, and the religious/moral growth of Waylon Harris. I’ve enjoyed this series so far, as Steven L. Kent has gotten a lot of good mileage out of the concepts of breeding clones to find a war (a plot which admittedly has some passing familiarity to the Star Wars prequels) and brainwashing/programming soldiers to fulfill certain goals. (In an intriguing twist, normal clone soldiers are programmed to think of themselves as human, and to see themselves as having blue eyes and blond hair, as opposed to the brown eyes and brown hair every clone really possesses. In short, it’s an army of clones, each of whom thinks he’s the only human in a sea of clones… and furthermore, if they realize the truth, they die on the spot. Which makes Harris’ self-awareness all the more unique.) Kent has also done quite nicely in giving his characters personal quirks, from the clone soldier who’s developed a prankster personality, to Harris’ growing religiousness.

It’s a far-flung plot, taking place in various parts of the galaxy, but it holds together pretty well, save for a few coincidences that can be passed off as characters being both luckier, and smarter, than one might expect. But then again, where Harris is concerned, it seems as though nothing’s entirely impossible, and people have learned to take that into account. Overall, I thoroughly enjoyed this book. It’s a nice, fast-paced military SF book with plenty of well-scripted action and adventure to satisfy the discerning reader, with a sympathetic narrator and a good build-up towards the end. I’ll be looking forward to the next in the series. Newcomers will want to start with The Clone Republic and Rogue Clone. 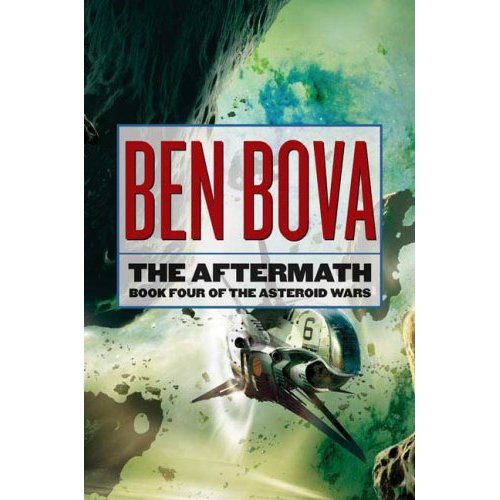 In the depths of the Asteroid Belt, many years from now, the aftermath of a short but brutal war for the resources of the asteroids leaves a number of lingering repercussions. One family is torn apart by an unprovoked attack, while an entire space habitat is destroyed, its inhabitants slaughtered. The perpetrator, soon afterwards, undergoes traumatic changes and sets out on a new path, one of attempted redemption. The existence of a mysterious alien artifact, meanwhile, prompts one of the most powerful men in the solar system to hire a team of assassins to wipe out any witnesses to his moment of weakness. And all of these threads will cross and affect one another over the next few years.

If that opening paragraph sounds awkward, it’s only because there’s some significant backstory leading up to the events in The Aftermath, billed as Book Four of the Asteroid Wars sequence, which itself fits into Ben Bova’s much larger Grand Tour sequence (16 books and counting). The casual reader doesn’t have to have read the others in order to appreciate that at one point, there was a series of struggles for control of the resources to be found in the Asteroid Belt; in fact, Bova does an excellent job of summing up the salient points early on, but there’s still a lot of subtext that factors into how characters relate to one another, and their motivations.

The Aftermath follows a diverse ensemble of characters. Aboard the crippled ship Syracuse, you have Theo, Pauline and Angie Zacharias, three members of a family, desperately trying to survive long enough to get their ship repaired and redirected towards some semblance of civilization. The remaining member of the family, Victor, is rescued, and spends the rest of the book trying to return to his family to save them as well. Aboard the Hunter, there’s the elderly, famous sculptor Elverda Apacheta and the war criminal-turned-cyborg priest, Dorn, who have embarked on a mission to grant peace to those slain in the Asteroid Wars. Meanwhile, the Viking plays home to Kao Yuan and Tamara Vishinsky, part of a team assigned to hunt and kill Dorn and his companion. Finally, the salvage ship Vogeltod is full of ruthless men willing to prey upon any ship they can encounter and overpower. All of these people, with their various goals and destinations, tie into the overall storyline, that of one family trying to get home, and a man seeking redemption or death.

Though sounding complicated on paper, The Aftermath is rather well told, and easy to follow, despite the alternating viewpoints and shifting narratives. Taking place over millions of miles and several years, it’s an ambitious story in some ways, taking advantage of the sheer size of the solar system to grant room for the action. At the same time, it’s a tightly-told tale that relies heavily on characterization and human emotion. In fact, it’s a very “human” story, with down-to-Earth motivations and goals, despite the disconcerting presence of an alien artifact at the center of things. Dorn wants redemption, Elvedra accompanies him out of an adopted maternal instinct, Victor just wants to rescue his family, Tamara is motivated by greed, and so forth. Very simple, very basic, and very well done. Bova’s strengths are evident here: believable characters and an attention to the details of hard science without obsessing over the minute details. It’s a gripping story that keeps moving, with plenty of twists and turns (and a few convenient coincidences), and like most of Bova’s work, it doesn’t disappoint. If you’re interested in hard science fiction that focuses on the human condition, this is a worthy book to pick up. I always enjoy new installments in the Grand Tour, and The Aftermath is no exception.