Hello, everyone! It’s time for another roundup of my latest fiction releases. Since my last post, I’ve actually seen a few things escape into the wild, so let’s get caught up, shall we?

First up, I have not one, but two pieces available at Enchanted Conversation, the online fairy tale magazine.

“Happily Never After” is a flash piece I wrote about fairy godmothers. Where do they come from? What do they get out of the whole deal? And what’s the hidden cost in accepting their aid?

“The Midnight Market” is a YA piece set in the Gaslight District of Puxhill. On the nights of the full moon, the Midnight Market, where you can find just about anything for sale, appears. Herein is the tale of one of its many mysterious merchants. What is the story of the girl on the blanket, and what’s her secret? 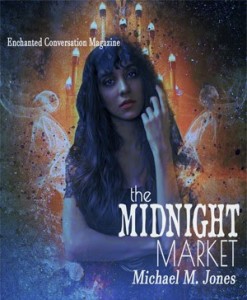 Meanwhile, if you pop over to check out the first issue of the new online magazine Constellary Tales, you can find “The Tears of Bourbon Street.” It’s an urban fantasy set in New Orleans, and it’s about love, loss, grief, Mardi Gras, ghosts, and the spirit of the Big Easy’s most famous street. Come, join Gideon Grace as he investigates the reason why Bourbon Street is infested by ghosts… I’m truly excited to see this story published, and I hope you like it also. Tangent Online says, “Jones creates an interesting world and leaves enough elements to explore to merit a return to it.”

In “The Muse’s Music,” Diana, who once upon a time was Euterpe, the Muse of music, now spends her time mentoring and seducing mortal musicians. Witness one such encounter…

In the mood for non-fiction? I also have a pair of Q&As with authors available over at Publishers Weekly! That’s right, they let me talk with people far more interesting than myself… and I had a blast.

Second, I spoke with Brandon Sanderson about his YA science fiction adventure, Skyward. A teenage girl dreams of becoming a pilot, to help defend her colony from alien attackers, but she must overcome her father’s legacy as a coward…

In my next update, I promise to put on my editor hat and touch base on my other outstanding projects. But hopefully, you’ll go check out the stuff linked above. If you like it, let me know! Feel free to leave comments, write reviews, or visit me on Facebook or Twitter...