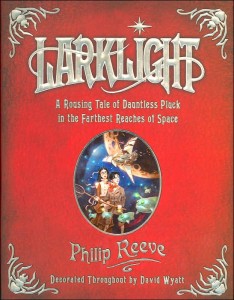 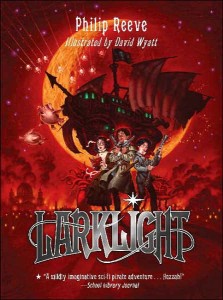 For Art and Myrtle Mumby, life is anything but normal. They dwell in the sprawling house known as Larklight, which occupies an orbit out in the blackness of space beyond the Earth’s Moon. Their history is one in which Newton’s discoveries allowed for the British Empire to rapidly journey into space and conquer the solar system, both dominating and trading with the many bizarre alien species which inhabit the nooks and crannies of planets far stranger than ever imagined. And when a mysterious visitor called Mr. Webster comes to visit Larklight, Art and Myrtle end up on the greatest adventure of their young lives. For Mr. Webster is a giant spider, and his race have plans for Larklight, and beyond that, the universe.

Now Art and Myrtle are caught up in an exciting race against time to free their father from captivity, even as they work with the infamous space pirate, Captain Jack Havock, and his ragtag crew of misfits, to prevent an ancient, evil plan from succeeding. It’s no-holds-barred action as they outwit the ships of the Royal Navy, terror as they delve deep into the bowels of enemy strongholds, and mystery as they unravel the secrets of Larklight. And throughout it all, our heroes will have to keep a stiff upper lip, and maintain that proper British can-do attitude. For Queen and Empire!

Larklight is without a doubt one of the most intriguingly-strange, brilliantly-different books I’ve read in a while. It’s an alternate-history Victorian kids’ adventure with space pirates, evil spiders, crackpot technology, and a roller-coaster of a storyline. You won’t learn anything about science or astronomy here, but you will have a grand old time. To add to the excellence of this book, David Wyatt’s illustrations perfectly capture the slightly over-the-top absurdity excitement, whether he’s depicting motley aliens, a battered old pirate ship, a gleaming ship of the Royal Navy, or mock-retro advertisements. He really manages to evoke the right blend of humor and action, and the combination of story and art pushes this book past good and into superb, in my opinion.

Though Larklight is targeted at somewhat younger readers, it will undoubtedly appeal to a wide audience. I can hardly wait for Phillip Reeve’s next offering in the series.