These two books are best looked at as a pair, since they look at the two sides of the same coin. Every so often, it seems, a story or novella comes along which is just so good, so powerful, or so brimming with potential that it deserves to be expanded into something greater. Thus, an award-winning story becomes the seed for a full novel, or even an entire series. Brian Thomsen’s collected some of these early masterworks and, in all cases but one, he has gotten the authors to contribute commentary on how each one of these stories evolved later on. (The Gordon Dickson story is accompanied by an introduction by the editor.) 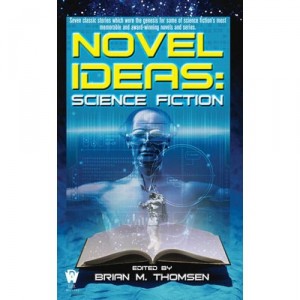 Now, I must confess that I haven’t read a lot of the novels derived from these stories, so I can’t accurately compare the beginning product to the finished one in all cases. But when looking at something like “Midshipwizard” as it relates to the novel Midshipwizard Halcyon Blithe, or the story “Ender’s Game” versus the book, it’s fascinating to see how the authors kept the seeds of an idea even as they expanded the framework around it. In most cases, I’d even argue that the story is better for the added detail, background, character development and even plot. In some of these cases, such as Brin’s “The Postman,” McKee’s “Unicorn Tapestry,” or Varley’s “Air Raid,” I’m now inspired to go and find the later product, as the stories offered here really do feel like the beginning of something greater. Like many, my previous exposure to Brin’s story came through the Kevin Costner movie, and here I can see that the movie didn’t do the original work justice. So whether you’ve read the original short story, the novel it became, both, or neither, these two books offer up some interesting material. I did have to wonder at the inclusion of three Card stories, as that seems disproportionately heavy given the relatively low number of authors represented in the first place. Obviously, there are plenty of stories out there which could also have been featured. Enough for a second round of volumes, should these catch on, I might hope.

In general, I found this set of anthologies to be both fascinating and useful, a worthy introduction to some science fiction and fantasy works I’d either missed out on previously, or never really looked at for one reason or another. As soon as I can make some space on my shelf, you can bet I’ll be looking to read a few classics as a result. 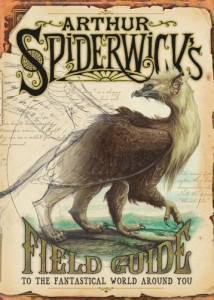 This is the long-awaited capstone to the bestselling, highly popular Spiderwick Chronicles, and is actually a replica of the book which carries much of the story’s plot. In the books, the three Grace children find their uncle’s Field Guide to the creatures of Faerie, and are thusly hounded, hunted, bedeviled and threatened by the various goblins, gnomes, trolls and what-not that are described within. Here at last is the book which started it all, recreated in all its glory by superb artist Tony DiTerlizzi, with help from the ever-impressive Holly Black.

Covering dozens of creatures, including many not actually seen in the Spiderwick Chronicles, it combines full-color drawings with textual articles on everything from Brownies to Unicorns, Dragons to Phookas, Goblins to Salamanders, and much more. Every page is a work of art, combining fresh new art with samples of Arthur Spiderwick’s original journal notes. As well, there are notes added by the next generation, in the form of the Grace children after their own encounters with the creatures of magic. If you were planning to study supernatural beings, this book might very well be a great place to start, provided you have the right equipment and a certain lack of self-preservation.

Quite simply, this is the logical successor to Brian Froud’s fairy books, as good as anything he has done on the subject if not better. Beautifully put-together, with richly intricate and whimsical art on every page, laid out with the utmost of care, the Field Guide is a worthy addition to the shelf of any fantasy lover, and a must-have for Spiderwick fans. DiTerlizzi and Black have outdone themselves here. I can’t recommend this item highly enough, and I suspect we’ll be seeing more from this creative team in the near future.

You may notice that many reviews have ISBN, page count, release date and price that doesn’t always jib with what’s in the stores. In many cases, I was working with the hardcover or some other edition of the book in question, and in the time sense, a trade paperback or mass market edition, or one from another publisher has come out. Therefore, I suggest you take the information with a grain of salt. If a book looks intriguing, I’m sure you know how to track it down via your local store or online. If not, feel free to ask me for details via the handy contact button.

Well, according to Google, this site is currently the top result if you were to look for “Michael M Jones.” I apologize for the bareness, we’re still uploading my review archive, but do feel free to visit often in the meantime. Thanks for stopping by. In the meantime, you can visit me at my Livejournal at oneminutemonkey.livejournal.com, where I’ve been keeping things somewhat up to date.

Still working some bugs out of the system. In the meantime, enjoy new reviews of L.A. Meyer’s Bloody Jack, Curse of the Blue Tattoo, Under the Jolly Roger, and In the Belly of the Bloodhound, the first four books in the Bloody Jack Adventures.

Hell To Pay, by Simon R. Green, and my review sidebar from the April 2006 issue of Realms of Fantasy have been uploaded.

And better news: Mike Resnick and Eric Flint bought the reprint rights to “Claus of Death” to be published in the upcoming Baen anthology, THE DRAGON DONE IT (scheduled for late 2007). Other authors to be featured in this book include Neil Gaiman, Esther Friesner, Harry Turtledove, Gene Wolfe and Tanya Huff. All great people, many of whom I’ve admired for a long time. I’m looking forward to this! More details when I have them.

My first story to be published in a print medium, on a large scale, was “Claus of Death” in the DAW anthology SLIPSTREAMS, edited by John Helfers and Martin Greenberg. It came out in May 2006, and I know you can still find copies in many major bookstores, or online. I’m particularly proud of this story, as it introduces Nick St. Claus, mythical person turned P.I. who’s sure to be a major player in my universe eventually. 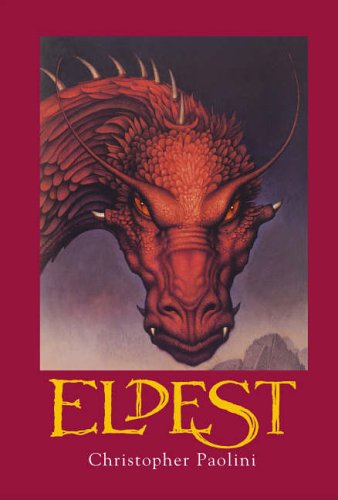 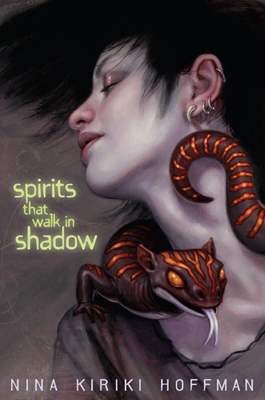