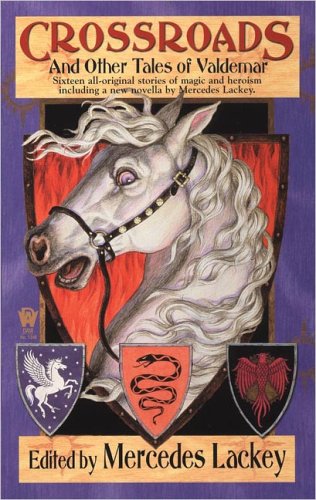 For the most part, Mercedes Lackey’s Valdemar universe has been a single-author playground, semi-sanctioned fanfic notwithstanding. However, every now and again, Lackey officially allows others to play in her sandbox. This is the third such collection, and once again she has put together a quality band of authors, both familiar faces and newcomers to the setting. For those who might need a refresher course, Valdemar is one of Lackey’s signature settings, a land guarded by the white clad psychically-Gifted Heralds and their magical, telepathic all-white horses known as Companions. It’s not easy being a Herald, as dozens of books and stories have covered, and here, sixteen authors, plus Lackey herself, return to Valdemar.

Larry Dixon leads off with “Transmutation,” in which a gravely-wounded gryphon discovers his ultimate potential and destiny. Richard Lee Byers explores death and treachery in the city of Mornedealth, in “Death in Keenspur House.” Brenda Cooper’s “Dawn of Sorrows” looks at a young Bard whose life has been recently touched with tragedy. Rosemary Edghill’s “Horse of Air” follows a Herald who, after his Companion was killed, took up the life of an undercover tinker.

In Tanya Huff’s “All the Ages of Man,” a Herald who feels saddled with too much responsibility at an early age must learn to distinguish between duty, discretion, and desire. Michael Longcor looks at the life of a young soldier in “War Cry,” while Michael Z. Williamson studies the ethics of a mercenary troupe called upon to do horrible things against their better judgment in “Naught But Duty.” And Mercedes Lackey gives us an untold tale of fan-favorite characters Tarma and Kethry in “Landscape of the Imagination,” where an escort duty turns out to be a far stranger journey than they ever expected.

You can look at Crossroads in one of two different ways: as a sampler of the many different facets of the Valdemar universe, or as a gift of love to its fans. Either way, you end up with a satisfying collection of stories that revisit the various corners of a rich and intriguing world. With nearly twenty years of details to draw upon, there’s a lot to work with, and these authors certainly do a good job. I’m pretty sure that even a newcomer would find something to entertain them, but if all else fails, I recommend reading Lackey’s Arrows of the Queen for a proper introduction. In general, this is a great collection, if somewhat specialized in scope.