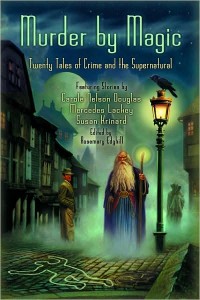 As with Powers of Detection, which I covered several months ago, Murder by Magic mixes the fantasy and mystery genres for some interesting results. Twenty authors present their characters with magical, murderous dilemmas to solve, divided into five categories: modern, fantastical, historical, genteel, and unclassifiable.

Jennifer Roberson’s “Piece of Mind” teams a tired ex-cop with a woman possessed of an unusual affinity for animals to solve not just an old murder, but a secret that’s haunted the narrator for much of his life. It’s an intriguing setup for future stories, and I hope she’ll expand on the idea. “Special Surprise Guest Appearance by…” by Carole Nelson Douglas takes a look at the strong rivalry between several Las Vegas magicians, and the secrets one utilizes in her act. In “Doppelgangster,” Laura Resnick mixes the supernatural and the Mob for a somewhat tongue-in-cheek effect. If certain wiseguys are getting whacked, how can they be seen, alive and well hours or days later? And who’s killing them to begin with? Josepha Sherman’s “The Case of the Headless Corpse” introduces Raven and Coyote, agents of the Magical Bureau of Investigation. When they attempt to delve into the cause of death for the titular victim, their investigation leads them to a most unexpected culprit. The partners work well together, with a great sort of chemistry, and hopefully this won’t be their only appearance.

Diane Duane’s “Cold Case” showcases a policeman with a truly difficult job to do: work with the ghost of an elderly murder victim to determine who killed her and why, so she can move on to the next world. But the cop’s job may be harder than he expected, especially when the truth comes to light. While the way this story plays out wasn’t entirely unexpected, it’s still poignant and well-told, and it lends itself well to further exploration. Laura Anne Gilman seems to be turning up all over the place of late, and I couldn’t be happier. She’s always good for an entertaining story, especially if she’s focusing on Wren and Sergei, the main characters of her first novel, Staying Dead, as she is here in “Overrush.” Someone’s killing wizzarts, those magically-inclined people whose powers have driven them nuts, preying on a part of the magical population prone to accidents, burnout, and untimely ends. But who, and why? It almost pains me to note that Gilman doesn’t so much resolve this story as bring it to a close, leaving plot threads open for future development somewhere down the line. As a stand-alone story, it lacks closure, which is a real disappointment, as it’s otherwise a great effort. I love how Wren and Sergei work with each other, a partnership that threatens to become more, but both Staying Dead and Gilman’s contribution to Powers of Detection are better examples of her work than “Overrush.”

Sharon Lee and Steve Miller turn in “A Night at the Opera,” a clever tale highly reminiscent of the Thin Man series (right down to main characters named Nick and (De)nora). When a noted practitioner of magic turns up dead, with no clues as to who did it, Nick and Nora have to unravel the mystery. However, they may not be prepared for what they find, or how it all plays out, and what it means for the magical society they belong to. Lawrence Watt-Evans gives us “Dropping Hints,” where a young Duke must figure out which of five identical golems brutally killed its wizard master … right in front of him. Even having witnessed the murder, can the Duke tell one suspect from another in time to do any good? Meanwhile, in “Au Purr,” Esther Friesner focuses on a witch investigating the death of her sister by disguising herself as a housecat. It’s a risky maneuver, fraught with dangers mundane and magical. She’ll have to content with everything from rat traps to demons to piece this mystery together.

In “Getting the Chair,” Keith R.A. DeCandido revisits the heroes of his new novel Dragon Precinct, Danthres and Torin. Once again, these two esteemed members of the Castle Guard have a dirty job to do: this time, figure out who killed a certain mage, as well as how and why. They realize just how bizarre a mystery it really is when the only witnesses worth questioning are the pieces of furniture enchanted into life by the mage prior to his death. This is a good, solid story, a police procedural that really takes advantage of the bizarre twists allowed in a fantasy setting while remaining grounded through good old-fashioned human nature. Torin and Danthres bring an everyman quality to their job that remains true no matter what world you’re on.

Mercedes Lackey looks once again at the unusual inhabitants of Victorian London’s Harton School for Boys and Girls, in “Grey Eminence.” Missionary’s child Sarah, and her best friend, native Londoner Nan, are in great demand for their strange abilities, but most of the time they’re able to keep things subtle and under wraps. However, the arrival of a feathered friend for Nan may change that, or it may just save them when things get really bad. It seems to me it’s been a while since we’ve seen this particular set of characters; I hope it’s not too long before they come back again.
All in all, Murder by Magic has some good stories, and a few excellent ones, making it worth picking up. Mystery and fantasy fans alike will find things to enjoy here.