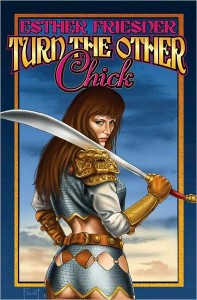 I find it fitting that I review this particular book in the same column as the newest Sword and Sorceress, given that the Chicks series is, in some ways, a direct response not only to the feminist focus of S&S, but the much-mocked “chainmail bikini” theme that become such a staple of the fantasy field for many years. Happily, it looks as though there’s still a call for humorous female fantasy fiction, as this volume marks the fifth in the series. You’ll find no shrinking violets here, no delicate damsels in distress, no fainting flowers of femininity. Rather, these heroines shatter expectations and violate conventions gleefully.
You want oversized heroines? Try Lee Martindale’s “Combat Shopping” or Yvonne Coats’ “She Stuffs To Conquer.” How about senior citizen heroines who refuse to settle down and grow old gracefully? Try Jim C. Hines’ “Over the Hill.” A heroine whose sense of honor extends to protecting whoever asks her properly, even if that would-be client is a cat? Jody Lynn Nye’s “Defender of the Small” is the place to look. Eric Flint skewers the sexist stereotypes of the Norse myths in “The Truth About the Gotterdammerung.”
Several stories are unofficial sequels to much older works of fiction: Laura Frankos returns to Shakespeare’s faeries in “A Late Symmer Night’s Battle,” while Esther Friesner revives the tale of David and Goliath with a major twist, in “Giants in the Earth.” Michael Turner’s “Psyched Up” is an unusual take on the “actor is mistaken for the character they play” theme, and John Hemry takes on the “writer follows their Muse” theme that most editors would rather kill than see again, in “Mightier than the Sword.” Luckily, his take on the whole thing is fresh enough that he gets away with it.
For most unusual heroine, turn to Catherine Shaffer’s “The Gypsy Queen,” where the heroine’s identity is at distinct odds with her true nature. In “I Look Good,” Selina Rosen’s heroine is an evil sorcerer’s minion whose lack of job security causes her to take drastic measures. For best title, the award is tied between “Hallah Iron-Thighs and the Hall of the Puppet King” by K.D. Wentworth, and Robin Wayne Bailey’s “Princess Injera Versus the Spanakopita of Doom.”
Harry Turtledove’s “Of Mice and Chicks” reimagines a literary classic with a female fantasy twist.
However, while the vast majority of the stories in Turn the Other Chick are highly amusing, and certainly entertaining, it’s the published debut of “Very Secret Diaries” author Cassandra Claire that really adds the cherry to the sundae. “The Girl’s Guide to Defeating the Dark Lord” truly captures the book’s mission: to turn all those old fantasy cliches inside out and look at them in a new, humorous light. She may very well have turned in the ideal “Chicks in Chainmail” story. I look forward to seeing Cassandra Claire’s future published works.
I quite happily recommend Turn the Other Chick. It’s a hardcover anthology – a hardcover humorous fantasy anthology – that’s well worth the cover price, with hardly a letdown in the lot, and some top-notch authors having more than their fair share of fun in the process.