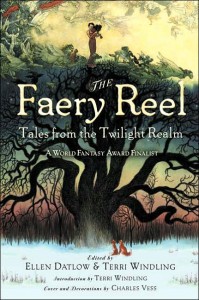 It’s taken me several months just to try and figure out what I want to say about this book. Mainly because it’s one of those rare occasions where I’m afraid that whatever I have to say won’t live up to what I really feel. See, I’ve long been of the opinion that you can’t go wrong with an anthology edited by Terri Windling and Ellen Datlow. Whether it was the first sixteen volumes of the Year’s Best Fantasy and Horror, or the superb series they did of retold fairy tales (starting with Snow White, Blood Red), or even their most recent effort, The Green Man, they’ve constantly put together some of the best fantasy anthologies around. And before this goes any further, no, this isn’t a buildup to me saying something horribly bad about The Faery Reel. On the contrary, it’s so good, I’m almost intimidated. Almost.
Much like The Green Man, this is actually a themed anthology aimed at a more YA audience (though with considerable crossover appeal for adult readers as well). Twenty authors have each contributed their takes on the vast and various creatures of the Fae realms, through fiction and poetry, and the lineup reads like the Fantasy All-Stars.
Holly Black, whose own interpretations of Faerie brought us Tithe and The Spiderwick Chronicles, turns in here a reimagining of Christina Rossetti’s “The Goblin Market,” with a Filipino twist in “The Night Market.” Two sisters, a curse, creatures of myth, and a magical market where anything can be bought or sold, if the price is right. “Never Never,” by Bruce Glassco, is a brilliant look at a certain hook-handed pirate, who must battle with feelings of despair and a crisis of faith, while examining the true reasons for the cycle of violence he’s locked into. It takes a lot to make that particular villain sympathetic, but Glassco goes beyond that: he makes Hook into a truly human figure, a tragic sort of villain caught up in something he long ago forgot how to understand. What secret keeps Hook coming back time and again to battle the boy known as Peter, and how does it tie into the true nature of Never Never Land? Quite simply, I was floored by how this story affected me.
Delia Sherman’s “CATNYP” is a fun, whimsical look at a world that exists between the mortal world and the realm of Faerie, where kidnapped humans – changelings – dwell, a magical shadow of New York with its own set of rules. It’s a story about a library, an adventure, some rules, and a stone lion, among other things. “The Faery Handbag,” by Kelly Link, is the story of a young woman, her grandmother, and a magical handbag which contains wonders and mysteries like no other. It’s an introspective story of love and loss, family and magic, and quirky bedtime tales.
I’m almost out of room, and I’ve barely just begun. I mean, I haven’t even touched upon the stories by Tanith Lee, Katherine Vaz, Gregory Frost, or Steve Berman. Discussing the contributions by Emma Bull (whose War For The Oaks is one of the best faerie novels ever), Nina Kiriki Hoffman, Patricia McKillip, Ellen Steiber, or Gregory Maguire could easily double my column’s length. And then there’s poetry by Charles de Lint (a true master in the urban fantasy field) and Neil Gaiman. And how can I neglect to mention the gorgeous artwork by Charles Vess? His illustrations are dead-on perfect, every time. And lest I forget, Terri Windling opens the anthology with one of her trademark essays, a scholarly look at faeries throughout history, and how they’ve interwoven with our culture and our consciousness, and how we’ve woven them into our stories and myths. She looks at how they’ve been treated in recent decades in film and fiction, making note of many of the best offerings to be found along those lines. It’s no coincidence that a number of the authors mentioned make appearances in this collection. Much like DVD extras enhance the film they’re packaged with, so does Windling’s essay add new dimensions to The Faery Reel.
While The Faery Reel is targeted at the young adult audience, there’s more than enough to appeal to older fans as well. Anyone who understands the lure and appeal of Faerie, who enjoys urban fantasy or fairy tales, who’s delighted in movies like Labyrinth or The Dark Crystal, who enjoys the paintings of Brian Froud, or who’s fallen in love with the work of Tennyson should be able to appreciate this book. Windling and Datlow have put together a top-notch collection, one that shouldn’t be missed. I read a lot of anthologies, and this one is easily one of the best I’ve seen all year, in terms of quality, depth, scope, and sheer magic.