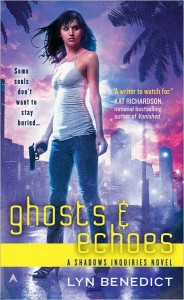 Sylvie Lightner is a private investigator who specializes in the supernatural, the weird, and the dangerous. Her last job was a real killer, and it’s taken her a month to recover and get her head back in the game. Unfortunately, that month is nowhere near enough, since she’s still haunted by the death of her occasional lover, Michael Demalion, and reluctant to tackle anything involving “life-and-death struggles.” However, she may not have a choice. First, she’s saddled with temporary supervision of her rebellious sister Zoe. Second, she takes a case involving some unusual robberies at a local mall. Third, she meets a Chicago cop who’s been possessed by a very familiar ghost, undoubtedly more fallout from the near-apocalyptic adventure Sylvie had the month before.

Now Sylvie’s up to her eyeballs in trouble, with necromancers and Hands of Glory popping up around every corner, a ghost putting the moves on her, a sister who’s been up to questionable hijinks with her friends, and an entire clan of local cops pressuring her for explanations and results. If Sylvie doesn’t put together the pieces of this puzzle, the dead will walk again, but at a terrible cost.

So far, two books in, this is proving to be a really fun, interesting series. Sylvie’s a tough, no-nonsense protagonist whose sense of responsibility and duty may occasionally lead her awry, but more often than not she’s out there kicking ass and doing her best to protect those she cares about. Her attitude is refreshingly direct, but not over-the-top enough to turn her into a cliched bad girl/action heroine. The world she lives in is, as might be expected, chock-full of the magical, mysterious, and menacing, but Lyn Benedict still finds new things to focus on. Ghosts & Echoes wraps itself around several plot threads, which come together in surprisingly subtle ways; it wasn’t until I was a third of the way in that I realized where the story was going, and then everything took on a new perspective. Honestly, I’ve never seen such an interesting, twisted take on the whole concept of the Hand of Glory (traditionally, the specially-preserved hand of a dead murderer, capable of opening locks and other nasty tricks.).
In a field that’s ever more crowded by private investigators dealing with the unknown, this series has found its corner and is doing quite well at maintaining its sense of uniqueness. Definitely one of the better series out there, and this book quite adeptly maintains the quality I saw in the first one.