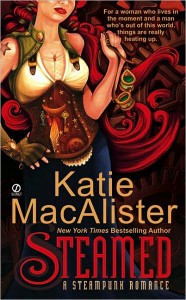 Following a bizarre lab accident, computer technician Jack Fletcher and his flighty sister Hallie are literally blown into another world. They wake up aboard the airship Tesla, commanded by the dynamic Octavia Pye, a red-haired, corset-wearing ray-gun wielding firebrand who captures Jack’s heart and libido from the second he sees her. Once Jack comes to terms with his new surroundings, he’s thrilled; a steampunk aficionado whose life has always taken unexpectedly strange turns, this is a world he was born to inhabit. Now he’s living the good life, traveling by airship, fighting pirates and saboteurs, romancing Octavia, and dealing with international intrigue. Just toss him a pair of goggles and he’s all set.

Octavia’s not sure what to make of her weird new stowaway, who seems way too fascinated by her corset and keeps muttering things about goggles and steampunk … whatever that is. He’s not a spy, and possibly not a raving lunatic (much) and there’s a distinct chemistry between them, and while she can’t afforded to get distracted, she’s allowed a little fun, right? They’ll have to rely on one another if they want to prevent an assassination attempt which could spark a war. Oh, and as for Hallie? When she’s not catatonic, she’s losing her grip, running away, or getting in trouble. Never mind her. She’s just there for the sequel.

Steamed is … interesting. As billed, it’s a comedy steampunk romance from the prolific and talented Katie MacAlister, her first real stab at this particular subset of science fiction. She wastes little time in setting up her male lead and thrusting him into an alternate world, and wastes little more time in making sure he and the female lead meet and start to doing what romantic leads do. Everything else – the traveling, adventures, action, airship piracy, assassination attempts – is just window dressing for the romantic entanglements of Jack and Octavia. (I’m serious: Jack’s sister really is excess baggage for much of the book, and if there’s not a sequel where she gets her own man, I’ll eat my hat.)

Based on the premise and setting, I wanted to like this book a lot. But I can’t help but feel something was lacking. In a word, it’s shallow, with very little extra thought given to fleshing out the history and details of the setting, beyond what’s needed for the immediate moment. You get the feeling that if you turn the corner too quickly, you’ll find the actors catching a quick smoke while waiting for the next show. In fact, the entire book has an oddly fetishistic tone to it; you’ve got all the trappings of steampunk with very few of the complexities. Airships, corsets, ray guns and weird mechanical widgetry don’t embrace the true depths of steampunk, but rather the easiest outward manifestations. Were it not for the passages told from other points of view, it would be all too possible to interpret this book as a hallucination brought on by the explosion in the first chapter, all conjured up by Jack’s subconscious and some toxic smoke. Certainly, he gets everything he could ever want, including the hot redhaired airship captain and the chance to play pirate.

Not that there’s anything wrong with that, mind you. I mean, sign me up for the same thing. But still, it was odd to read through this and come away feeling as though I was missing something. Admittedly, there’s some real chemistry between the leads, and the intimate scenes have a real spark to them, and there’s plenty of good-hearted humor to be found along the way – all hallmarks of MacAlister’s writing and to be expected – so not all is lost.

The final verdict? Steamed scratches an itch and fills a niche I didn’t realize existed, but it nonetheless comes off as flighty and superficial, preferring to leave the subtleties and complexities for other endeavors down the line. It’s great popcorn reading, but could have been so much more.