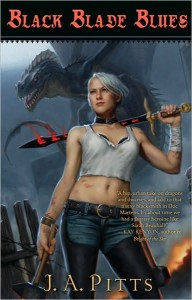 For Sarah Beauhall, life’s about to get very, very complicated. A blacksmith by trade, she live from paycheck to paycheck, making horseshoes for local farmers and replica weapons for convention-goers and the local Society for Creative Anachronism. By night, she works as props manager for low budget movies, like Elvis Versus the Goblins. Coming from a rather sheltered, fundamentalist Christian background, she’s still trying to piece together her feelings for her first ever girlfriend, terrified of public displays of affection and unable to really admit, even to herself, that she’s gay. Already in a mild state of emotional turmoil, she’s nowhere near ready for the trouble that’s about to unfold. When her favorite sword is broken, she sets out to repair it, only to be given an enigmatic warning from one of the movie’s extras: “If you attempt to reforge that sword, you must not fail.”

Turns out that she’s in possession of the legendary sword Gram, once used by the hero Sigurd to slay the dragon Fafnir. And now that Gram has turned up, some very old, very powerful people want it, and will stop at nothing to obtain or destroy it. Now Sarah has to deal with giants, trolls, dwarves and dragons, even as her life crumbles around her. With her job, her friends, even her relationship slipping through her fingers, with events spiraling out of control, Sarah may very well have to slay a few dragons of her own, or lose everything.

Black Blade Blues is a remarkably complex book, highly reminiscent of early Mercedes Lackey in some regards. Originally published in short form under the same name in the DAW anthology Swordplay (2009), it’s been cleaned up and expanded quite considerably here. Sarah’s intertwined struggles to defy destiny and come to terms with her own sexuality make for interesting, gripping reading. She’s the sort of heroine you alternately want to smack sense into, and hug comfortingly, especially as it becomes clear just how much of this is beyond her control. Elements from Norse/Teutonic mythology are utilized with great success here, weaving through and around the plot in an increasingly creepy, dramatic manner. What starts out relatively subtle becomes downright deadly by the end, where ancient myth and modern technology collide with devastating results.

All in all, Black Blade Blues is an extremely strong start to a new series, and I can’t wait to see what happens to Sarah Beauhall and her friends after this. It’s clear that we’re just scratching the surface of this setting, with Sarah as a relative newcomer to a world inhabited by ancient dragons, desperate dwarves, and hidden deities. Good stuff, without a doubt.