↓
Home Menu ↓
Skip to primary content
Skip to secondary content
Home→Reviews→Divine/Infernal Beings→Dancing on the Head of a Pin, by Thomas Sniegoski (Roc, 2009) 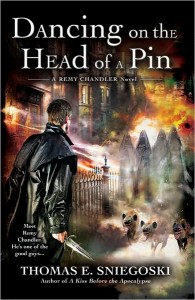 The recent death of his wife Maddie has left Boston-based P.I. Remy Chandler in an emotional downward spiral, bereft of one of his major connections to the humanity he’s cultivated for millennia. For Remy’s no ordinary gumshoe; once upon a time he was Remiel, a Seraphim of the Heavenly Host, an angel who fought loyally for Heaven until the brutalities of war caused him to reject his duties, hide his nature, and adopt a veneer of humanity. Despite his best efforts to avoid the entanglements and trappings of his previous existence, his old life has a nasty habit of sneaking up on him. Recently, he helped to thwart the Apocalypse, and as a result, dark things are once again stirring at the edges of society.

Take his newest case: Remy’s been hired to track down a batch of weapons which vanished from a private collector’s vault. No ordinary weapons, these are older than mankind and filled with a dark power and purpose. Whoever possesses them could be an unstoppable killer … or use them for an even darker, more unthinkable purpose. All of a sudden, trouble’s crawling out of the woodwork, trouble that smells like Hell. Now Remy has to find the weapons known as the Pitiless, keep them out of the wrong hands, and puzzle out why the enigmatic Nomads, an angelic faction which refused to take sides, might be involved. The answers will take Remy and his allies into the depths of Tartarus itself, where fallen angels reside and Lucifer Morningstar himself is imprisoned. The balance between Heaven and Hell will be irrevocably altered, no matter how Remy handles this one. The only question is, what will it cost him? Even angels can die, under the right circumstances….

With this book, Sniegoski tosses his cards on the table, revealing that he’s working on a much larger scale than the average urban fantasy, and playing for a larger pot than the average noir detective tale. Remy may have started off trying to pull a simple retrieval job, but the events set in motion are centuries in the making, and the consequences are epic in nature. And yet, there’s an intensely human, personal aspect to Remy’s struggle to balance his Seraphim and human natures, his attempts to ground himself with friends and family and a mortal job even as Heaven comes knocking on his door to invite him home. Good thing he has his ever-loyal Labrador Marlowe and his cop friend Mulveville to keep him human when the Heavenly temptations get to be a bit much.

Dancing on the Head of a Pin is a tightly-woven mixture of mystery and dark fantasy, presenting an intriguing vision of a Hell reserved for fallen angels who have yet to earn their parole for good behavior, a place of punishment and imprisonment not for wayward humans, but for Heaven’s unfaithful children. It offers up a complex underground society of rebellious, disaffected, even war-traumatized supernatural beings who’ve fallen a long ways from their original glory. It even offers up a small hint as to what the war cost those who remained loyal; it seems no one escaped unscathed, and some wounds have never healed. A third book in the series is clearly a necessity, given the way things turn out in this one. The more Remy Chandler’s world unfolds, the more I want to see. I want to know his this saga turns out.