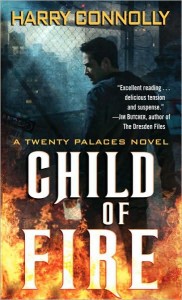 Hate your job? Be glad you’re not Ray Lilly, an ex-con who currently works as the driver and “wooden man” for Annalise Powliss, an enforcer for the mysterious Twenty Palace Society. She’s responsible for finding people who misuse magic, and shutting them down permanently, no matter what sort of damage she has to cause. And she hates Ray, living for the day when she gets to kill him. Obviously, this isn’t a partnership built on trust and mutual respect. The two of them have come to the tiny town of Hammer Bay, Washington, to investigate rumors of magic gone awry, and from the moment Ray sees a child burn to death, he realizes this case may be his last.

Children are dying, their very existences forgotten by friends and family in the wake of each spontaneous event. The cops aren’t to be trusted, the townspeople are hiding something, and all signs lead to Charles Hammer the Third, owner of a suspiciously-prosperous toy company and part of the Hammer family for whom the town is named. As each avenue of investigation gets shut down, Ray and Annalise realize the danger may be worse than they expected. Before long, Annalise is incapacitated by a magical attack, and Ray’s forced to pursue the truth on his own. Unlike Annalise, he’s no magician; he’s a thug with a few useful tricks and a penchant for getting the job done. He’ll bully, intimidate, brutalize, bluff, and fight his way through the worst Hammer Bay has to offer, from fire-breathing secretaries to corrupt cops, from psychotic prostitutes to the secret source of Charles Hammer’s influence and strength. It won’t be pretty, it won’t be clean, and it won’t be nice. But with the world at stake, and his own death pretty much a sure thing, what’s Ray Lilly got to lose?

Right from the start, Child of Fire yanked me into a dark and brutal world of hidden magics, small town secrets, and anything-goes action. Part of this book’s appeal lies in the intriguing setup, that of Ray and Annalise acting as roving enforcers for what clearly seems to be a ruthless society bent on saving the world heedless of the collateral damage. We honestly don’t learn a lot about the Twenty Palace Society, but enough tidbits are dropped to tickle the imagination. Comparison’s to Jim Butcher’s White Council or Laura Anne Gilman’s Mage’s Council might be in order, but I suspect these guys would make either of those esteemed groups look like Girl scouts in terms of kindness.

That moral ambiguity actually carries over to the main character, Ray, who exemplifies the grey area in just about everything he does. Is he a good man doing bad things, or a bad man doing good things? It’s not clear. We learn through the course of the story that he has a history of trying to help people through questionable, even inexcusable methods, and that he had no other choices at the time. Here, pressed on all sides by hostile forces and a growing sense of urgency, he’s forced to compromise his own beliefs time and again, to tarnish his soul repeatedly in an attempt to do the right thing. His antagonistic, hate-hate relationship with his boss, Annalise, doesn’t do him much good either. She’s willing to use him as just another tool, rather than as a person, and it’s fascinating to watch their interactions change over time.

Child of Fire is a hard-hitting addition to the urban fantasy field, full of mystery, violence, strange magic and stranger people, like if someone mixed together Jim Butcher and Stephen King and infused it with some Die Hard sensibilities. There’s a lot to like about this book, and I’m quite eager to see where the series goes from here. Connolly hits the ground running with this debut, and I couldn’t be happier.