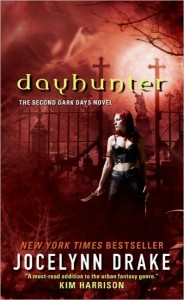 Mira was happy when all she had to do was watch over her territory of Savannah, Georgia, making sure no nightwalkers or werewolves got out of line. Sadly, the quiet days are but a fading memory, as her nocturnal world becomes a treacherous nightmare. The naturi, ancient beings who’d love to wipe the Earth clean of humans and vampires alike, have come out of hiding, intent on freeing their queen and the rest of their kind from centuries of exile … and Mira is, quite unwillingly, the key to freeing or imprisoning them. The Coven, which rules the nightwalkers from its stronghold in Venice, has summoned Mira to do its bidding, but she’s tired of being used as a pawn, especially when she discovers an unholy conspiracy among its ranks.

Now, partnered with Danaus, an immortal who hunts nightwalkers, who’d as soon kill her as work with her, Mira has to survive the machinations of friend and foe. She has to outwit millennia-old vampires, outfight werewolves, outlast an army of naturi, and do it all without betraying the existence of the supernatural to the mortal eye. No wonder she misses Savannah. And what’s she to do about her growing affection for Danaus, when his very existence is dedicated to killing her kind?

Dayhunter continues the story begun in Nightwalker, about a world where vampires -aren’t- the worst things out there, a world where a shadowy war and ancient plans threaten a fragile peace. It’s about Mira, whose centuries of loyal service have been rewarded with betrayal and manipulation, a vampire who teams up with her mortal enemy out of necessity. It’s about fighting the greater of two evils, and praying you’ve made the right choice.

In the wrong hands, Dayhunter could easily be just another urban fantasy. But Jocelynn Drake has thrown in some intriguing twists on the old standards. Her vampires aren’t all bad; some of them even want to protect humanity. Her elves, on the other hand, are psychotic genocidal monsters who make the vampires quiver in their coffins. The supernatural races are hidden, as is pretty standard for the genre, but they’re preparing, slowly, to come out of the shadows after they’ve finished preparing the human race through media and pop culture acclimatization. Right there’s one of my favorite twists, the idea that the supernatural races have a decades-long time table for going public, and God help anyone who messes with it.

I’m torn between finding the language a tad overblown and flowery, and quite in tune with the narrator’s nature. Certainly, Mira does have a rather poetic way with her descriptions, and a tendency to overdo it with her observations (and a gift for repeating herself when it comes to describing people as nightwalkers, vampires, werewolves, hunters, and so on.) It’s a style which grows on you after a while, however, and it makes perfect sense given Mira’s age and temperament.

All in all, I enjoyed Dayhunter as much as I did Nightwalker. This continues to be a strong series with an intriguing premise and a clear sense of what’s at stake. The ever-shifting web of intrigue, betrayal, and temporary alliances ensures that if nothing else, Dayhunter is unpredictable and entertaining. I’ll be interested to see where the author’s going with this story in future installments.