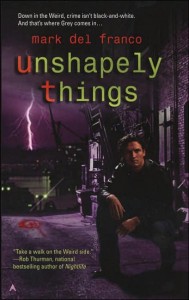 Once upon a time, Connor Grey was a hotshot member of the Ward Guild, a druid on the fast track to importance and power. That is, until a traumatic encounter with an ecoterrorist elf left him crippled magically and forced him to strike out on his own as a private investigator. Now he handles cases involving the fey where neither the Guild nor the Boston Police Department are able, or willing, to get involved. It’s dirty, nasty, occasionally discouraging work, and a far cry from the stuff he used to handle, but for Grey, it’s a way to stay involved. And maybe someday, he’ll get his powers back, and finally be allowed to get revenge upon the elf who caused it all. But in a world where elves and fairies, druids and dwarves, coexist alongside normal humanity, there’s always something that needs his attention.

First up is a string of murders involving fairy prostitutes in the Weird, the Boston neighborhood where the desperate and lonely, discarded and secretive, all dwell. Naturally, there’s a lot more to these killings than meets the eye, especially when Connor discovers that there might be some sort of ritual involved. To crack this case, Connor will have to work with a variety of friends and allies, from the human cop Murdock, to the tiny flit Joe, to his old coworker Keeva, to the intimidating Briallen. The further they dig, the more they uncover, the killings linked to one of a handful of rare magical crossbreeds. Ultimately, Connor’s quest for justice brings him into a final, messy confrontation with a madman who might very well destroy the world in his attempt to claim both power and revenge. If Connor’s resolve fails now, no one will be safe.

Obviously, Connor doesn’t die, and the world doesn’t end, as some time after he recovers from that mess, he’s again called into the Weird. This time, a human gangbanger and a prominent elf diplomat have died, in separate yet equally ugly fashion, and what looks like two unrelated killings at first is soon proven to be the tip of a horrible problem indeed. Connor’s on the case, no matter what some people would say, and he’s not about to give up yet. People are dead, trouble is brewing, and he’s determined to solve the case. But as he digs deep, the Teutonic elves and Celtic fairies come closer to outright war in the streets, their rivalry fueled by drugs, territorial squabbles, and ancient rivalries. Connor will again have to mobilize his closest allies, including the alluring, mercurial Meryl, as he tries to keep the conflict from destroying the Guild and the Weird as it escalates beyond control. But who’s behind it all, and how are they connected to Connor and his allies? That’s what Connor would like to know.

Mark del Franco has really created a fascinating world for this series. Four races of supernatural beings, roughly split into two different ethnic factions, came to Earth in an event known as the Convergence, and things have been complicated ever since, resulting in plenty of tension, political infighting, intrigue, and outright messiness at times. Into this, we have our hero, Connor Grey, who’s as classic a hardboiled P.I. as one can hope for, a man broken by his past and down on his luck, but noble and strong-willed and too stubborn to ever know when to quit. He’s surrounded by a host of equally interesting characters, including Murdock, who’s as close a friend as Connor comes to in the mortal world, and Joe, who’s as much a pest as he is a secret resource. Connor’s interactions with Keeva, who acts as both ally and enemy, and Meryl, who’s both love interest and occasional foil for his ego, likewise fuel plenty of entertaining scenes.

The plots move quickly, with a good number of twists and turns, and the mysteries at the heart of the story are genuinely intriguing. I just couldn’t stop reading, eager to learn just how everything wraps up and who did what to whom and why. There’s a lot to this setting, and plenty of back-story left to be uncovered, and I can hardly wait to see just what del Franco has in store for his heroes in future installments. This is definitely urban fantasy with its own identity, hardboiled mystery with action and politics and intrigue all worked into the plot, and it’s a lot of fun. Give this a shot if you’re afan of Jim Butcher, Mike Carey, or even Simon Green’s Nightside series.