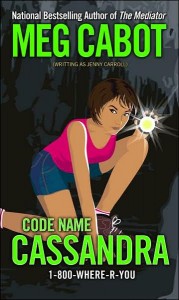 Most people, when struck by lightning, end up in the hospital. Sixteen-year-old Jessica Mastriani, however, is granted a bizarre psychic ability as the result of her unfortunate accident. Now, when she sleeps, she finds missing people in her dreams, waking up with their location and sometimes their condition firmly planted in her consciousness. It all started with knowing just where the kid on the back of a milk carton was, years after he’d been kidnapped by his own mother after a custody dispute. Jess did the only proper thing: she called 1-800-WHERE-R-YOU, a national hotline dedicated to tracking down missing people and helping to return them to their proper homes. The first time was a success. The second, a statistical fluke. But four successful calls later, Jess discovered a new problem: the government had a very keen interest in her, and a use for her powers. Once she realized what they had in mind, turning her into a human bloodhound for escaped criminals, terrorists, and that ilk, she went on the run, combining her flight to freedom with an effort to rectify an earlier mistake. Little did she realize that was just the beginning of her adventures.
After the events of When Lightning Strikes, everyone supposedly believes Jess has lost her powers. At least, that’s when she wants them to believe. Unfortunately, the FBI’s still watching her closely, and people still come to her for help whether she wants them to or not. Even going away to work as a counselor at a summer camp for musically gifted children can’t let her escape from her newfound notoriety. Finally, someone makes a case she can’t refuse, and Jess, AKA “Lightning Girl” is on the job, this time trying to rescue a missing girl from an unsuitable mother and a psychopathic stepfather. And all Jess really wants is to be left alone. Oh, and for rebellious, all-too-hunky Rob Wilkins to give in to that passion she knows he’s hiding for her… Can Jess survive long enough to get kissed? That’s what she has to look forward to in Code Name Cassandra.
Then Jess returns home after spending the summer away, only to learn that in her absence, one of the most popular girls in school was murderer, and she’s blamed for not doing anything to stop it. Never mind she was nowhere near. Forget that she’s not supposed to have her powers anyway. The high school mentality is a fickle one. But then another cheerleader is kidnapped, and Jess can’t stand by, even if her two favorite FBI agents, Smith and Johnson, are hot on her trail. And what’s she to do when a handsome football star starts hitting on her? The stakes are higher than ever, especially when someone resorts to arson to try and scare her off the trail. In Safe House, the dangers hit close to home.
In Sanctuary, events heat up all the more, after racial tensions and cult killings bring Jess’s small town home to a boiling point, with all signs pointing to a nasty militia group as the culprits. After one young man is murdered, and another kidnapped, Jess has no choice but to ally herself with the FBI if she wants to save an innocent life and stop the militia group from hurting anyone else. Luckily, though she doesn’t trust the FBI one bit, she still has her would-be boyfriend Rob, and the calvary (in the form of a group of truckers and rednecks) at her back.
What can I say? Meg Cabot’s books are a guilty pleasure. The 1-800-WHERE-R-YOU series is genuinely fun, and a little addictive. The point of view character is pure teenager, with a down to earth way of expressing herself, and a very dry sense of humor that bleeds through into her internal commentary, leading to a rather relaxed, flowing sort of story. Jess is really likable: headstrong, independent, stubborn, prone to hitting people who annoy her (that includes FBI agents, by the way), hopelessly in lust with a boy two years older than herself, and determined to do the right thing, no matter how stupid it seems at the time. She’s surrounded by memorable characters: her restauranteur father, her long-suffering stay-at-home mother, her schizophrenic brother Douglas, her other brother Michael (who’s still harboring a crush on the girl next door, the one who sunbathes every day in summer, in public), her faithful-yet-exasperated best friend Ruth, and the mismatched FBI agents Smith and Johnson. There’s also Rob, a former juvenile delinquent still on probation (for what he won’t say), who seemingly has no defense against Jess; persistent ways. Add them all together, and you have a series with a distinctive voice. Honestly, I didn’t think I’d like this series at a first glance, but once I started, I couldn’t stop reading until I’d polished off all four books. And if you like these books, I also recommend Cabot’s Mediator series, which I may cover in a later column. My only real complaint is that the titles really don’t seem to match the plots, save for When Lightning Strikes. It almost feels as though the names were drawn from a hat after the book was already written. A small quibble, though, and it shouldn’t discourage you from checking them out. 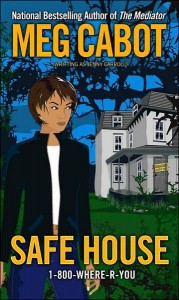 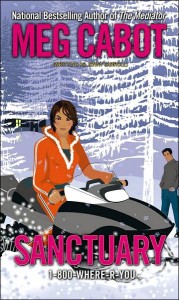