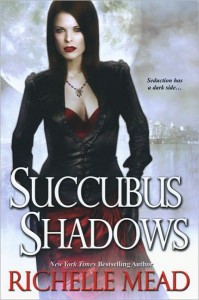 Ever since she broke up with her mortal boyfriend Seth, succubus Georgina Kincaid has been in a royal funk, and it’s been getting worse ever since she reluctantly agreed to help plan Seth’s wedding to one of her best friends. Acting noble and self-sacrificing when all you really want to do is steal the groom-to-be away is hard at the best of times, downright impossible when you’re a creature of Hell whose job is to corrupt the good and steal their life energy. Georgina’s always been a woman of drastic contrasts, though.

The more down she gets, however, the more it seems like some strange outside force is trying to lure her away, stalking her at her most vulnerable. So she throws herself into work, tries not to obsess about Seth, and attempts to discern why another succubus is in town “on vacation.” When she learns just what’s after her and why, she realizes all hope may be lost. Because caught under their power, she’ll relive the worst and most defining moments of her centuries-long life, and be driven to the breaking point of despair. Can the love and obligation of her friends save her, and if so, at what cost?

Now onto its fifth book, this series about the succubus with the moral streak just keeps getting weirder and more engaging. All along, Mead’s been dropping hints that Georgina isn’t like other succubi, and that there may be irregularities with her contract with Hell. Here, the plot thickens and progresses a little; there may not be concrete answers, but we get more insight into her checkered past, seeing who she was long ago and where she started to rebel against her Hell-given directives. We also see more of the strangely compelling interaction between the forces of Heaven and Hell, and it’s becoming ever clearer that it’s not a struggle of absolutes. We’re already familiar of the odd friendship between Jerome, Georgina’s supervisor, and Carter, his angelic counterpart for the Seattle area, and now it seems there really is something else going on behind the scenes. Naturally, the rest of Georgina’s friends are present, and the subplot involving the vampire Peter, who has the hots for a cute little Gothlet who rejects him for not being vampiric enough for her tastes, is sure to raise a few laughs.

Internal mythology aside, this series continues to straddle the line between urban fantasy and paranormal romance, with the continuing thread of Georgina’s on-again off-again relationship with Seth, who was her favorite author until he became the love of her life. Clearly, the feelings still exist on both sides, even when they’re apart, and it’s entirely possible that their bond exists on a deeper level than either expected. Unfortunately, explanations will have to wait for another book, though there’s some interesting progress made here.

Fans of the series will undoubtedly enjoy this latest installment of Georgina Kincaid’s adventures, and appreciate the development of the slow-burning overarching storyline that’s been present in each book. It’ll definitely be interesting to see what Mead has planned for future books.