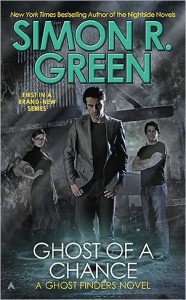 Got ghost problems? You’re in luck. The intrepid agents of the Carnacki Institute will investigate. They’ll do whatever’s necessary to take care of the problem, from convincing the ghost it’s time to move on, to kicking its sorry ectoplasmic ass. Their best team is a three-person operation, capable of handling any problem. There’s JC Chance, the leader, technogeek Melody Chambers, and drug-addled telepath Happy Jack Palmer. Between them, they have every eventuality covered.

Fresh off a job involving a haunted supermarket parking lot, the team is sent to deal with an extremely nasty incident originating in the Oxford Circus Underground station, an unprecedented event that’s just the start of their worst adventure yet. Something ancient, alien, and powerful is threatening to break through down where the sun never shines, and it’ll take everything the team has just to survive, much less succeed. And just to complicate matters, they have to deal with their evil counterparts from the Crowley Project, who believe the best opportunity is the one seized through force and blood. But when the chips are down and it’s everyone for themselves, can the two teams work together? And who’s going to tell JC Chance that falling in love with a ghost is a monumentally bad idea? (All of them, that’s who.)

The start of another new series from the ever-popular Simon R. Green, Ghost of a Chance is billed as his first real horror novel – which is a rather disturbing thought at first, given his propensity for injecting horrific elements into just about everything he does. Sadly, if anything, this just reads like more of the same. Surprisingly, there aren’t any overt connections to any of his other series, meaning this might just be a rare standalone series for an author who’s carefully laced together everything else he’s done.

The characters themselves are part archetype, part collection of neurotic quirks, and somehow lacking any real depth. There’s plenty of witty banter and snappy dialogue, but rarely do we see below the surface. They’d make great protagonists in an action movie, but I don’t feel like I know them nearly as well as I do some of Green’s earlier characters, like Rupert and Julia from Blue Moon Rising.

I can’t call this horror. It’s dark urban fantasy, with some horror trappings, but it doesn’t strike the right chords to be true horror, the sort that sparks nightmares and makes you turn on all the lights at night and jump at shadows. Maybe I’m just used to Green’s style, his ability to creep me out with a well-turned phrase or image, or maybe he goes for the gross-out a little too enthusiastically – a literal river of blood appears at one point – but it didn’t really bother me the way some horror does.

Hey, as an urban fantasy, it’s good. It’s fast-paced, filled with nifty concepts and memorable characters, and quite enjoyable. I’ve never disliked a Green book, and even his lackluster efforts still have the capacity to make me happy. Ghost of a Chance may not be as awesome as his other stuff, but it’s not awful by any stretch of the imagination. I’ll be looking forward to more of this series, if just to see what Green will do next.