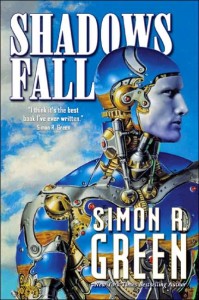 Somewhere off the beaten path of society and civilization, there lies the mysterious town of Shadows Fall. The elephants’ graveyard of the imagination, it’s where gods and heroes, legends and monsters, myths and childhood companions all go when their time is close to and end, when it’s time to fade away. Some stay and live out quiet lives as they’re forgotten by the outside world, others go through the enigmatic Forever Door, and on to whatever lies beyond. The entire town is ruled over by the immortal Father Time, who uses a variety of clockwork assistants and the turnip-headed Jack Fetch to help keep a semblance of order. It’s a town full of faded musicians, forgotten superheroes, formerly-beloved cartoon characters, time-tossed creatures, and much more. And then James Hart, the subject of an old prophecy, comes home at last, and everything changes, forever.

Even as a serial killer stalks the streets of Shadows Fall, the unstoppable forces of the fundmentalist Christian Warriors of the Light infiltrate and invade the town, and soon, the streets run with blood. In the middle of death and confusion and chaos, it’s all a small band of disparate characters can do to stay alive. James Hart, destined to bring Shadows Fall to an end. Polly Cousins, trapped in her house for decades by a memory. Lester Gold, the Mystery Avenger, a pulp hero who’s been retired for years. Sean Morrison, a rock and roll musician who died before his time. Leonard Ash, who came back from the dead as a revenant, his purpose unknown. Bruin Bear and the Sea Goat, anthropomorphic cartoon characters who refuse to be forgotten. Rhea Frazier, mayor of the endangered town. Madeleine Kresh, an angry young woman sworn to protect Father Time. They’ll all have their parts to play in the last moments of Shadows Fall. But as the Warriors of the Light slaughter indiscriminately, as the Wild Childe kills its own victims without warning, and as the legendary, terrifying forces of the Fae rise up from their Hill to do battle one last time, it’s possible that no one will survive the apocalyptic climax…

Shadows Fall is definitely one of Simon Green’s odder, more ambitious done-in-one books. Released a good fourteen years ago at this point, it’s an odd beast, reflecting an earlier style that defies easy description. Present are characters and organizations and concepts that will come back in later books, such as the Warriors of the Light and Bruin Bear, and the idea of overlapping genres; fantasy, science fiction, comic books, and childrens’ cartoons all mingle and interact in Shadows Fall, giving it an epic feel of anything goes. Also present are the bizarre ideas, catchy names, and evocative descriptions that can be found in just about any Simon Green book you care to name, from Lester Gold the Mystery Avenger, to Jack Fetch the silent (yet deadly) scarecrow. However, in a distinct change from the norm, Shadows Fall lacks the over-the-top uber-characters that populate his Nightside, Deathstalker, and other series. For all that Leonard Ash is unkillable because he’s already dead, the Fae are scarier and nastier than anything alive, and James Hart wields unimaginable power, there’s a very strong sense of most characters as, well, human and vulnerable. And that’s not a bad thing at all. It’s oddly refreshing to see such normal characters, and ironic that they should exist in a town populated by faded legends and forgotten heroes.

Shadows Fall is fast-paced and complex, but it tells a full story in the space of its pages, and we really get to know all od the main players, good and bad, throughout the course of events. Green takes some time to really establish who they are and what they mean to one another, before he cranks things up to the highest volume and cuts loose in a shocking orgy of violence, destruction, and mayhem. Literally, no one is safe in the latter half of the book, once the Warriors bring their war to Shadows Fall, and it’s almost overwhelming to see who lives and who dies, and in what fashion. My only real complaint would be the abrupt nature of the ending, which comes upon you like a brick wall at 80 miles per hour. Given that Shadows Fall is referenced in other works, such as the Nightside series, it’s obvious that it, or a version of it, is linked to the greater overall mythos Green’s created (one which connects the Nightside series, the Deathstalker series, the Secret History/Eddie Drood books, and the stand-alone Drinking Midnight Wine). I’m just not sure exactly how it fits in, given the semi-ambiguous nature of the ending. I suspect it’s best not to ask too many questions, and just roll with it.

I’ve always enjoyed this book. It’s heartfelt and complicated, with some interesting things to say about reality versus perception, the fickle nature of imagination, and the way pop culture goes through trends and discards bits and pieces regularly. I’ve always thought Bruin Bear was a nifty character to get to know, and I’d love to have read Lester Gold’s pulp adventures.

This is definitely a Simon Green classic. Some might say it’s his best; he certainly has claimed so on occasion. I say it’s great fun, and worth reading whether you’re a fan of urban fiction, a fan of Simon Green, or just in the mood for something sparawling, epic, action-packed, and yet confined to the pages of a single book. Give it a shot if you haven’t already.