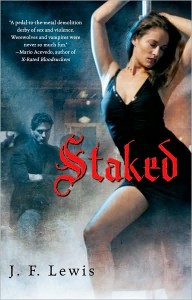 It’s not always easy being a vampire. Take Eric, for example. He’s got some serious rage issues, and both short- and long-term memory problems that have plagued him for his entire undead existence. His girlfriend, Tabitha, keeps insisting her turn her into a vampire as well, and nice guy that he is, he’s tempted to do it even though it’ll inevitably ruin the relationship. His best friend, Roger, isn’t as excited about the strip club he co-owns with Eric as he used to be. And when Eric wakes up from a rage blackout to find he’s killed another vampire, and a werewolf wants him dead, well, it sets off a whole chain of bizarre events that seem aimed at ruining everything he cares for and destroying him specifically.

Between the werewolves who want him dead, the vampires who -really- want him dead, and the vampire slayers who want him dead, staked, burned, and disposed of, Eric barely has a chance to catch his metaphorical breath. To make things even more confusing, he’s inexplicably falling for his girlfriend’s little sister. Could things get any worse? Oh yeah, someone close to him may be behind everything. Luckily, Eric’s got family to help him out, even if they are a little unstable and violent on a good day.

Staked is a strangely-compelling vampire story, in which the action, vampirics, and outright outrageousness have all been cranked up as high as the printed page can stand. J.F. Lewis’ vampires pack an amazing array of powers, and Eric is the bloodsucking equivalent of a Spinal Tap song: he goes all the way to eleven. It makes for a certain over-the-top, unashamed insanity, a freewheeling intensity that refuses to settle for anything less than the maximum in carnage and adventure. I see Staked as a B-movie extravaganza, with strippers, a werewolf ice hockey team, sex magic, a magic anti-werewolf gun, and vampire-on-vampire violence aplenty to keep things from getting dull. Done improperly, or with less grace, this sort of thing could fall flat on its face, doomed to failure as pastiche or parody or schlock; Lewis manages to avoid that fate, pulling off an entertaining story that stands out from the more generic vampire fare that I’ve seen of late. With a fast-paced plot, a variety of interesting characters, and a certain cheesy eagerness, Staked makes for great reading, and I’ll definitely pick up Lewis’ next offering to see if he can keep it up.