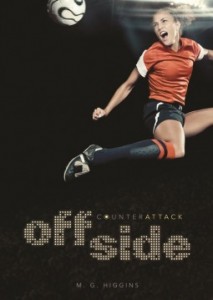 Faith Patel may only be an average soccer player—practically a benchwarmer for the Fraser High Copperheads—but it’s something she loves.  More importantly, it’s one of her few refuges from the constant pressure of family and academics. Torn between her responsibilities to her younger siblings, and her mother’s insistence that she get the grades needed to get into a good school, she has to fight for the chance to play soccer, to take a little something just for herself.  Worse, her obligations prevent her from having a social life, and she afford the time and money needed to pay on club teams like many of her teammates, further setting her apart.

Things get complicated when she develops a crush on her coach after he shows an interest in her wellbeing. Now Faith has to worry about what to do, how to approach the older man. Is it all in her head, or is there a real spark?  And when one of her teammates finds out, will everything come tumbling down?

Offside is a strong, if fairly to-the-point, story about warring obligations and inappropriate crushes.  Faith’s predicament is honest, believable, and just a little painful, as we see the desperate-for-a-break, stressed-from-all-sides young woman get caught between dutiful daughter and sister, and teenager in need of stress relief.  It’s easy to identify with her yearnings, confusion, and desires.

However, the short nature of this book seems to keep the storylines from really going anywhere. What could have been a powerful way to explore the power dynamics between teen and adult, athlete and coach, fizzles, primarily present only in Faith’s mind.  Coach Berg is pretty much an unknowing participant in the plotline, and we never get to see just what he thinks, or how he’d react.  Likewise, the issue with Faith’s teammate and the potential blackmail/troublemaking also stays fairly mild, never going anywhere.  While I’m definitely not advocating that the author take up what could be an intensely controversial or volatile issue, the fact remains that the storyline seemed ready to steam right into those troubled waters, before veering off into safe territory. Sadly, this book just doesn’t seem to reach its full potential, possibly due to its relative brevity, or an inability or unwillingness to push the boundaries.

Despite these shortcomings, Offside is a well-written story, with realistic characters and believable situations, featuring the sort of problems teens can undoubtedly relate to. While the storyline revolves around high school varsity girls’ soccer, detail-rich and featuring numerous scenes set on and off the field, it still touches on universal themes.  At just over 100 pages long, it’s little more than an appetizer for some readers, but it might just be the right size to read on the bus after a game. The diverse characters and positive message, straight-forward without being heavy-handed, make this a worthwhile read. While not as strong as others I’ve seen in the series, it definitely has an appeal and a charm unto itself.