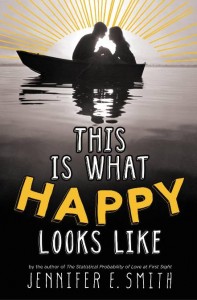 He’s a teen movie star with a pet pig and a severe case of the sort of loneliness only the famous can know.

She’s a small town girl with daddy issues and her own reasons for keeping out of the spotlight.

When an email goes to the wrong address, it sparks a conversation and unlikely friendship between Ellie O’Neill and Graham Larkin. Despite the simmering chemistry found in their electronic exchanges, they hesitate to reveal actual names, giving their relationship an air of mystery and anonymity.

That all changes when Graham’s newest movie chooses Ellie’s home town of Henley, Maine, to do some local shooting. Soon enough, the two have met face to face, and they finally have the opportunity to take things to the next level. But can they embark on a relationship without the whole world knowing? How will Ellie’s friends, or worse, her overprotective mother, handle her dating a movie star? Is Graham the sort of guy to settle for a girl like Ellie?

For the most part, This Is What Happy Looks Like is a fairly standard romantic drama/comedy, albeit an entertaining, wholly satisfying one. As I read it, I made certain predictions about how things would go wrong, and at what point (since, as we know, things always go wrong…) To my pleased surprise, I was generally wrong.  Smith manages to avoid most of the obvious pitfalls and stumbling blocks, and steers clear of the usual sort of awkward miscommunications which are standard romcom fodder.  In a sense, my enjoyment of this book stemmed not from what happened, but from what didn’t happen.

The initial email exchange between Ellie and Graham is both cute and a perfect insight into their characters; it’s hilarious that a seventeen-year-old movie star stays up late emailing random people because he’s got nothing better to do…and yet it’s totally fitting in Graham’s case. (Though a Hotmail address?  Really? People still use Hotmail?)

The only part of the story that didn’t quite work for me was when Graham and Ellie took the time out to go find her father, who she hasn’t seen in years. It’s not that it was a bad sequence—in fact, it was a perfect opportunity to see both of the characters out of their natural elements, giving them a chance to, well, just be themselves—but it felt like a whole different story altogether. Sometimes a road trip element works, sometimes not, and this was a case where it felt out of place and could have been handled in a different fashion.  (I can just imagine circumstances where Ellie’s father, a U.S. Senator, decides to visit Henley to meet with Graham to bolster his image among the younger audiences…)

I really did enjoy this book. Ellie and Graham’s romance is believable and sweet, and they overcome all the various obstacles with a minimum of effort, mostly stemming from Ellie’s own issues.  Graham, it must be said, felt almost too good to be true, unspoiled by fame and fortune and Hollywood success, a teenager struggling with loneliness as his career alienates him from friends and family. Is it possible to remain that normal when you’re one of the hottest teen actors on the market? (Okay, he has a pet pig named Wilbur, how normal is that?)

In short: a lovely story that works wonders from a slightly improbable premise, starring likeable characters and a satisfying romance. This may not be ground-breaking, but it’s definitely what happy looks like.