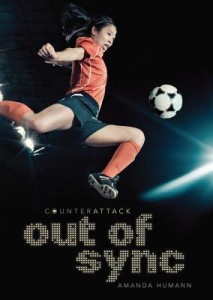 Madison “Maddie” Wong plays soccer for the Fraser Hugh Copperheads.  A talented midfielder, she dreams of playing for a Division 1 college like Stanford or Duke, but she’s overly reliant on the “sick soccer sync” she shares with her best friend Dayton.  Together, they’re unbeatable on the field. Unfortunately, the more intense Maddie becomes, determined to show off her skills to the college scouts starting to come by, the less dedicated Dayton is. In fact, Dayton’s more interested in partying and boys, leaving her “sync sister to founder and flail on her own.  Will Maddie be seduced by her best friend, and abandon the game for a chance at a social life? Or will she find her own path, one that doesn’t rely so heavily on a single other person?

Out of Sync, part of the Counterattack series of quick reads for “reluctant readers,” focuses on the intense pressures facing many student-athletes. Maddie, the very picture of the driven player, must find the right balance between her athletic ambitions and her friends, between striving for perfection and accepting when she needs help. When she realizes just how much she depends upon Dayton, it forces her to reassess her skills, her rapport with her fellow players, and her own inner strength. She struggles with the temptation to let it all slide, to relax, and it almost costs her more than she can stand.

Like all of the books in this series, it’s rather short and to the point, with little room for extraneous plots.  Out of Sync is a fun story, with realistic characters and believable situations, featuring the sort of problems teens can undoubtedly relate to. While the storyline revolves around high school varsity girls’ soccer, detail-rich and featuring numerous scenes set on and off the field, it still touches on universal themes.  At just over 100 pages long, it’s little more than an appetizer for some readers, but it might just be the right size to read on the bus after a game. The diverse characters and positive message, straight-forward without being heavy-handed, make this a worthwhile read.