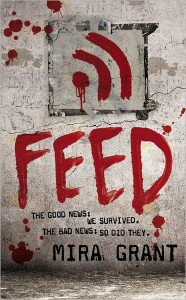 In an attempt to cure cancer and the common cold, scientists accidentally sparked something worse: a virus which turns its victims into mindless, ravening zombies. Twenty years later, the hungry dead are just a fact of life, one to be avoided when possible, dealt with when necessary. It’s a world of paranoia and danger, constant blood tests and intense personal security, where human contact is minimalized in favor of staying indoors, and where blogging has achieved a new level of popularity and legitimacy.

Enter Georgia (George) and Shaun Mason, intrepid siblings about to take on the job of their lives. She’s a hard-edged journalist with an eye for the news, he’s a thrill-seeking adrenaline junkie who pokes zombies with a stick for the delight of his audience. And they’ve just been accepted as the official campaign bloggers as Senator Peter Wyman makes a run for the White House. Even in the year 2040, with vast parts of the world considered uninhabitable due to zombie infestations, some things never change. Especially politics.

But as George and Shaun, along with their poetry-writing, technogeek companion Buffy, take to the road with the rest of Wyman’s team, they discover that not everyone wants the Senator to land the party nomination. Someone wants them all dead, at any cost. In finding out who’s behind the campaign troubles, assassination attempts, security leaks and zombie attacks, the Masons may get more than they ever bargained for.

Combining zombies, politics, epidemiology, pop culture, blogging, humor and horror, this is one hell of a series opener. Grant (the open pseudonym for urban fantasist/artist/songwriter Seanan McGuire) knocks the ball out of the park with Feed. The worldbuilding is solid, the tone is believable, the character voices ring true, and the twists and turns prevent predictability. The author knows her zombies, and has done an exemplary job of grounding them in reality and envisioning a world that goes on despite their existence. The human spirit may be bruised, but in the Masons, it’s certainly not broken. Of course, after the events of this book, with several threads left open for further exploration, the next in the series can’t come quickly enough.