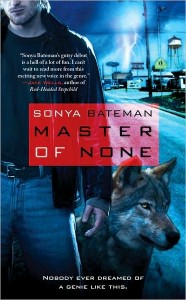 Gavyn Donatti is a thief whose luck has run out, repeatedly. He may have a knack for escaping situations unscathed, but he’s left behind a strong of burned partners and angry ex-employers. His most recent gig – to steal a priceless artifact – goes sour when he actually loses the item in question. Problem: his employer, Trevor, is a stone-cold psychopath who doesn’t take no for an answer or accept failure. For his screw-up, Gavyn’s dead meat. That is, until he’s saved by a genie.

Ian, as he calls himself, is a djinn who needs Gavyn for unspecified reasons. As such, Gavyn’s his master, but don’t mistake this for anything other than a partnership of extreme reluctance on either side. Assuming the two can get through their mutual distrust/dislike of one another, they have to elude Trevor’s forces, and save the world. Huh? That’s right, save the world. A deadly conflict between djinn factions has been brewing for centuries, and only Ian and Gavyn stand to prevent it from erupting into all-out disaster. Luckily, they have allies. Unfortunately, they include two of Gavyn’s former partners, both of whom hate his guts for different, justifiable reasons. One was crippled on the job, the other is his ex-lover. Whoops, way to go Gavyn.

Now, as Gavyn explores the abilities he never knew he possessed, mends fences with the people he screwed over, and discovers why Ian needed him in the first place, he has to man up for once in his life and do whatever it takes to stop Trevor from killing them all and save the world from djinn magic gone wild. He may be a bad thief, but can he be a good man?

Master of None combines some of the best and worst aspects from Grand Theft Auto, Ocean’s Eleven, Martin Lawrence movies, and whatever buddy film springs to mind. It’s the story of a thief, his genie (who hates him), his ex-lover, and a whole lot of violence and action. As such, it’s one heck of a high concept, and for the most part, it actually works pretty well. The plot moves along at a breakneck pace, and Bateman doesn’t spare her characters the consequences of their actions. It actually gets pretty ugly, pretty nasty at times, especially once we see the extents to which Trevor’s willing to go to achieve his goals, so this may not be for the squeamish. However, the strong characterization and attention to details help make this a rather enjoyable urban fantasy, one that claims its own identity amongst the crowd and sticks to it. I’ll be interested to see where the series goes from here.