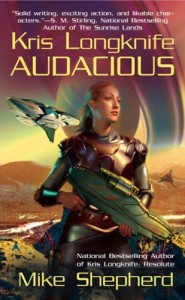 A Longknife’s work is never done. Naval lieutenant Kristine Longknife, Princess of Wardhaven, is in dire need of a vacation, after the way things have gone for her over the past few months. Thusly, she packs her bags and her entourage, and hies off to the planet of New Eden, where she hopes things will stay quiet for the time being, while she (reluctantly) fulfills various diplomatic and military obligations, most of which involve standing around and looking pretty and dealing with paperwork. The first assassination attempt suggests that things aren’t going to be quiet; the second clinches that thought, and convinces Kris and her allies that New Eden isn’t the safe haven its name would suggest. Now it’s up to Kris, her bodyguard Jack, her maid Abby, and her sentient computer Nelly, as well as a squad of highly-trained Marines to cut right to the heart of the matter and figure out what’s going on under the surface of New Eden.

As our heroes dig deeper, they discover a deeply conflicted planet on the verge of revolution, where one hand definitely doesn’t know what the other is up to, and where various forces are looking to play out a very deadly game. Unfortunately for the bad guys, they’ve messed with the wrong princess. Kris Longknife tends to shoot back, with prejudice. And New Eden will never be the same after she’s done with it.

The fourth book in this fast-paced, exciting military SF series, Kris Longknife: Audacious continues the saga of a strong heroine who knows how to kick serious ass and make an impression on friends and enemies alike. Mike Shepherd has a great ear for dialogue and talent for injecting dry humor into things at just the right moment. His heroes are capable — perhaps too capable, as it’s hard to ever feel that Kris and friends are ever in real danger — and confident, even if his villains aren’t quite as complex as one might hope. Some people might consider his prose to be a little choppy, but it does keep things moving along at a brisk clip. What matters is that the characters are engaging, and the plot is full of twists and peppered liberally with sharply-described action. I always look forward to installments in the Kris Longknife series, because I know I’m guaranteed a good time with plenty of adventure. Audacious doesn’t disappoint in this regard. Military SF fans are bound to get a kick out of the series as a whole, and fans will be glad to see Kris hasn’t lost any of her edge.