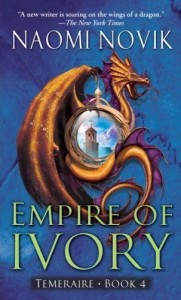 After a near-epic journey halfway across the world to China and back, surviving adventures, treachery, and battles galore, Captain Will Laurence and his dragon companion Temeraire thought they could settle back into something resembling a normal life. Normal, that is, for life in the middle of the Napoleonic Wars. Unfortunately, they’ve returned to a nightmare: the dragons of England’s Aerial Corps lay sick and dying from a mysterious disease, and it seems as though only Temeraire is immune to the illness which threatens to wipe out England’s only hope against Napoleon’s forces. In a desperate attempt to find a cure, Temeraire and Will Laurence, along with several of their colleagues, are dispatched on a mission back to Africa, in the hopes that their salvation lies somewhere in its vast depths.

Once there, Will and Temeraire are plunged into an adventure unlike any they’ve had before, as England’s culture slams right up against the myriad native cultures which still dominate deep within the jungles. The slave trade, and the encroachment of European nations, has left a bitter taste in many native mouths, and as our heroes are about to find out… Africa has dragons also. Soon, it’ll be everything Will and Temeraire can do to rescue themselves and their friends, and escape a hostile, alien environment. Worst of all, once the survivors make it home, Will and Temeraire will be forced to make an unthinkable decision based on honor and loyalty, one that could cost them everything.

The fourth in the popular Temeraire series, Empire of Ivory continues to explore a fascinating alternate history where the Napoleonic Wars were fought using dragons in addition to the traditional methods. Moreover, this is a world where dozens of species of dragons have lived alongside humans for as long as anyone can remember, serving a variety of functions. We’ve already seen how the European nations use dragons primarily for war, viewing them as something of a dangerous inconvenience at other times, and how they’re respected and honored in Chinese society, and now a new twist, how dragons relate to African tribal culture, is introduced, to great effect. And as usual, there’s Will to provide a slightly liberal, yet thoroughly influenced by English morality of the time, viewpoint, and Temeraire to balance it out with practical, thoughtful innocence. I can certainly appreciate this ‘world tour’ they’ve been on, and how Naomi Novik uses the two of them to provide contrast and commentary on the various cultural leanings of the world during this period of time, and I hope we’ll continue to see parts of the world as yet untouched-upon in future volumes.

Novik has a real knack for conjuring up fully-realized, three-dimensional characters who aren’t afraid of being flawed. Will Laurence himself can be overly concerned with propriety and image, having grown up in high society before taking to the seas, but his more relaxed viewpoints make him a nice counterpoint against his less open-minded peers, as we see to great effect when he spends some time mingling with various influential people. Temeraire may cut to the chase with his simplistic views, born of inexperience, but it’s clear he doesn’t know the full complexity of human society yet. And of course, his draconic nature is a perpetual influence upon his priorities, which ends up steering the plot in some fairly major ways more than once. Then you have such stalwarts as Captain Catherine Harcourt, who, as a female in the Aerial Corps, goes against a great many social expectations and constraints with her opinions and behavior, or Captain Thomas Riley, formerly one of Will’s own officers, whose differing opinions over slavery and propriety fuel a major disagreement with Will. One minor character who steals the scene whenever she’s around is Iskierka, a young dragon of Turkish origin possessed of a precocious nature, great fighting spirit, and tremendous initiative. She gives Temeraire a run for the money as far as most personable dragon is concerned.

There’s a very real sense of danger and adventure present in this series, and Empire of Ivory is no different. With many dragons dying from a mysterious disease, there’s clearly no guarantee that any of the infected ones will survive, especially with some of the better featured ones (such as Maximus and Lily) quite sick indeed. There’s a sense of impending doom and dread that hangs over their heads, and I was quite worried that some of my favorites might not survive to see the cure found. Kudoes to Novik for getting the reader to feel for these dragons, and to worry for their safety as much as they would any of the human characters. As well, there’s never any guarantee that people will survive the numerous battles that come about as part of the wartime setting, whether it’s in aerial combat against Napoleon’s forces, or in a fight for survival against mysterious feral dragons down in Africa.

I could go on, for I’ve barely touched upon the fascinating cultures discovered in this book, and how they give rise to the title, Empire of Ivory, nor have I lavished praise upon the gripping descriptions of combat, or the underlying moral issues that help make the story so complex. The truth is, I’m thoroughly hooked on this series. I honestly never thought I’d be this excited over historical fantasy, especially since I’m very picky about my alternate history reading, but Novik has taken this period, and this concept, and really made it her own. Empire of Ivory is a worthy addition to the Temeraire series, and my only complaint is that it’s left on a cliffhanger note, and it’ll be a while before we see how Temeraire and Will deal with their new crop of troubles. But you can bet I’ll be there to see how it turns out. If you’ve read the first three in the series, get this one. If you’re a newcomer, I urge you, by all means, to start with His Majesty’s Dragon, and enjoy.