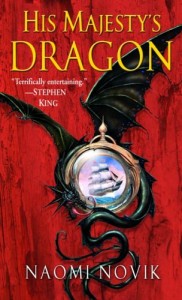 As the Napoleonic Wars rage on, the captain of the British ship, HMS Reliant, one Will Laurence accidentally gets swept up in events far greater than his own everyday experiences could ever have anticipated. The capture of a French frigate yields up a truly extraordinary prize: an unhatched dragon egg of unknown origins. When the egg hatches en route to a friendly port, the dragon within chooses to bond with Will, creating an unlikely partnership and the beginnings of a legendary friendship. For in this world, those who bond with dragons become part of the Aerial Corps, airborne swashbucklers who command multi-ton dragons in exhilarating combat against their enemy counterparts.

For the naval-inclined Will, this is but the first of many startling changes to which he must adapt.

As the months wear on, he and his dragon Temeraire must adjust to the new rigors and demands of the Aerial Corps, make compromises between old standards and new, and cope with societal expectations and depreciations (for while being a naval Captain might be quite dignified, very few consider being the captain of a dragon to be anywhere near as respectable or desirable.) And all too soon, Will and Temeraire learn about combat as part of the Aerial Corps, as Napoleon’s forces embark upon a daring, audacious plan to invade England. It’s dragon vs dragon in the wild blue yonder, and may the strongest survive. Oh, and as the mystery of Temeraire’s draconic lineage deepens, and his true nature is revealed, it threatens to open an entirely new box of problems. Both his original owners and his intended master want him back at any cost, and under that pressure, there may be little Captain Will Laurence can do.

I thought I’d seen every interesting take on dragons, but Naomi Novik manages to prove me dead wrong in this start to an excellently entertaining series. I never thought I’d find the Napoleonic Wars era to be nearly as fascinating as she does with this alternate history variation. The blending of historical action with fantasy overtones may not be a new concept, but she makes it wholly believable, and utterly engrossing. Once I started reading, I couldn’t stop following the saga of Will and Temeraire, eager to see just how they’d cope not just with one another but with the world they’d been thrust into. And of course, as the action heated up, it was next-to-impossible to put the book down.

I absolutely adore Temeraire, a strong-willed dragon whose loyalty, nobility, and unyielding faith in his master are matched only by Will’s dedication to duty, honor, and country (and of course, his own loyalty to Temeraire, which blossoms out of a sense of duty and grows into a full-fledged partnership). These are two beings I’d want on my side no matter what. Happily, His Majesty’s Dragon is populated with fascinating characters of all moralities and personalities, from the adorably pathetic dragon Levitas to the fiercely blunt Captain Jane Roland and the justifiably resentful Lieutenant Granby. Together, they help to flesh out a world I look forward to seeing quite a lot more of in the near future.

It’s without any reservations whatsoever that I recommend His Majesty’s Dragon as something fresh and invigorating in the world of military fantasy, and a worthy new take on dragon fiction. The only thing I can think of which comes close to this in recent years is James M. Ward’s Midshipwizard Halcyon Blithe, which combines dragons with a Horatio Hornblower feeling, but in a full-fledged fantasy setting. I know His Majesty’s Dragon is to be followed by two more books in the series in subsequent months, and I can hardly wait.