It is my honor to announce that following several retirements in the past few years, and a lengthy hiring freeze, the Feline Supervisory Committee has finally acquired a new intern. Sebastian, aka the Tiny Tabby Terror, aka Streaky, aka the Mini-doofus, comes to us after a short stay with the Roanoke RCACP. At only six months old, his resume is somewhat light, but he has already proven himself extremely talented in the arts of nose-licking, cheek-rubbing, head-butting, and finger-chewing. He is a skilled wrestler, a champion at hall dashing, and apparently fearless (and perhaps lacking in common sense.)

Committee members Gideon MacFluff and Professor Virgil the Weird have already taken him on as an apprentice in The Feline Arts, a comprehensive curriculum which will enable him to become a full-fledged member. The female half of the Committee refuse to have anything to do with these shenanigans; they think boys are silly and rambunctious.

We look forward to spending many years with Sebastian. 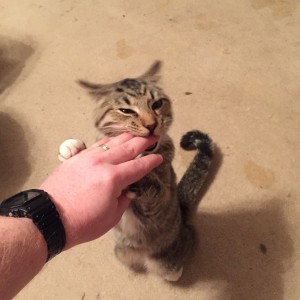