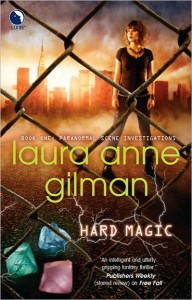 What do you do when you’re fresh out of college, unable to get a job that doesn’t involve a hairnet and a spatula, and magically talented? Well, if you’re Bonnie Torres, you get recruited by an enigmatic pair of magicians to help start the world’s first forensic paranormal investigation agency. That’s right, Bonnie and four strangers have just been tapped to start PUPI – Private, Unaffiliated, Paranormal Investigations -, dedicated to investigating and handling crimes within the magical community. Unaffiliated with either the hidebound Council or the fractious lonejacks, answering to no one, neutral in a world where the tension between factions is increasing steadily.

It won’t be easy. Bonnie and the others have to learn to work with one another, trust each other, hone their specific strengths and blend their styles to work as a team. They have to create an entire system of magical forensics from the ground up, and earn the trust of a great many people unused to trusting anyone. They have to prove their worth and hold strong against those who’d shut them down before they ever get started. And when their first case comes, it’s a trial by fire for the unready, untested group, and it might just be their last.

If you’re familiar with Gilman’s Retriever series, you may already know where some of this is going; Bonnie and the PUPIs appear in the latter half of that series and become semi-regular secondary characters. Hard Magic serves as the background and origin story for PUPI, and gives us in-depth introductions to the various members of the team and their various specialties. It’s an interesting look at the world of the Casa Nostradamus from an all-new viewpoint, and it gives us some more understanding of a setting where Talents (magic-users) and fatae (non-human beings of all sorts) walk among us in secret. Gilman’s clearly having a lot of fun here as she walks her characters through the invention of a whole new (for them, anyway) system of magical investigation and analysis, something we haven’t seen much of in the urban fantasy genre. (The closest comparison I can make is to Jes Battis’ Tess Corday series, which is much more high-tech and organized in its execution.)

The mystery is solid, the characterization strong, the plot fast-paced, and the final product solid. This is a great start to a new series, a perfect jumping-on point for new readers and a satisfying expansion of the world first visited in the Retrievers series. I loved Wren and Sergei’s story, and I’m now hooked on Bonnie Torres and the PUPIs.