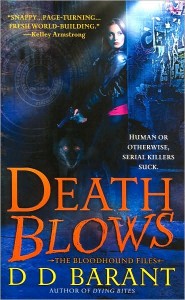 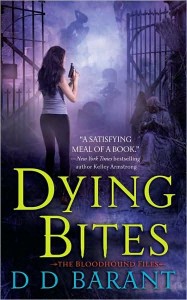 FBI profiler Jace Valchek has spent her life learning how the criminally insane think, to the point where she’s an expert. And because of that experience, she’s just been abruptly reassigned to work with the NSA. Just … not the NSA she was expecting. She’s been sent into another world, a parallel dimension where things took a strange turn in the 13th Century. In this new world, vampires, werewolves and golems constitute the vast majority of the populace; normal humans make a mere one percent. The supernaturals don’t succumb to mental illness, only the humans, and there’s a serial killer on the loose. If Jace ever wants to see her home again, she’ll have to stop this madman from pursuing his bloody work.

Now she has a vampire for a boss, a werewolf for a doctor and therapist, and a golem for a partner. She’s an extreme minority in a world that’s strangely familiar and utterly alien, and she’s tracking a killer across the world. But every body is another piece in a terrifying puzzle, and what it suggests could be disastrous if left unchecked. Of course, even if Jace can save the world, it doesn’t necessarily mean her job here is done. Not if, for instance, her primary target escapes….

That’s Dying Bites, the first of the Bloodhound Files. In Death Blows, we see how poor Jace is coming to terms with her extended stay in a world where she’s an oddity and an outsider. She’s still on the hunt for Aristotle Stoker, leader of the Free Human Resistance, who’s eluded her for over three months and counting. In the meantime, there’s plenty of work to be done; thanks to Stoker, supernaturals are now capable of going insane, and they keep coming unhinged.

This new case is weird even for Jace’s line of work. It all starts with a murdered vampire wearing a Flash outfit. (Barry Allen, the Flash who came to prominence in the ’60s, for those playing at home.) Jace quickly discovers the impossibility of this: comic books have been outlawed since the ’50s, ever since a certain guy, name of Wertham, used totemic magic to become incredibly powerful, and extremely dangerous. His reign of terror ended when the government sponsored a team of “superheroes” known as the Bravo Brigade to stop him. They won, and disbanded, the individual members fading back into obscurity and their personal lives.

Only now someone is killing the former members of the Bravo Brigade and stealing their various artifacts, including a sword which can supposedly cut through time, and a gem which can manipulate energy. Jace and her partner, the golem Charlie Aleph, have to stop whoever’s behind this new spate of killings before they can pick up where Wertham left off. Good luck. She’ll need it.

This is an astonishingly intriguing, highly captivating series. The setting is amazingly well thought out; every question I thought to ask about how some aspect of it works, Barant’s anticipated and answers in the narrative as Jace encounters each new discrepancy between her “real” world and the one she’s stuck in. The idea of a world where supernaturals make up the extreme majority and have had to adjust to their new status on top, while humans are practically an endangered species is certainly one with a lot of potential, and Barant’s milking it for all it’s worth. Both books thus far start off as murder mysteries, but there’s so much more going on, including Cthuluesque monstrosities, comic book cults, golem bounty hunters, vampire superheroes, werewolf gangs and perky undead teenagers.

If anything, Death Blows is even more outrageously inventive than its predecessor. It’s absolutely steeped in comic book lore, invoking the works of Grant Morrison, Alan Moore, Neil Gaiman, and more. From the Doom Patrol to Superman, Crisis on Infinite Earths to Animal Man, The Flash to the X-Men, clues are gleamed and parallels drawn, all pulled together by the vampiric literary counterpart of a comic book writer you might not expect. To top that all off, an episode of Seinfeld plays a small but important part. I can honestly sit here and say I’ve never seen a plot that plays out quite like this, and it’s both weird and awesome.

So why should you read this series? Because it’s urban fantasy, where the main character is an FBI profiler armed with a gun and an attitude, in a world where vampires and werewolves are the majority, whose partner is a golem powered by the spirit of a T-Rex, and who investigates serial killings involving Elder Gods and contraband comic book cults, all while hunting the immortal shaman who can send her home. And it’s goooood.