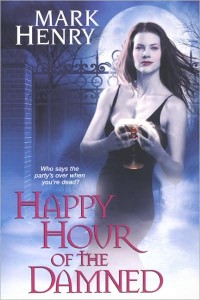 Amanda Feral is a zombie, a foul-mouthed fashionista who trolls the bizzare nightlife of supernatural Seattle with her best friends (a vampire, a succubuss, and another zombie), drinking flirtinis and occasionally eating unwary humans by night, advertising executive by day. It’s not a conventional lifestyle, but she makes it work with her unique brand of dry humor and stylish practicality. However, when one of her friends texts her with a plea for help, only to immediately go missing, Amanda is jolted out of her routine, and dragged into an ever-more-dangerous search for the missing woman. Now Amanda’s going to have to brave all sorts of weird hazards, from rogue zombies at Starbucks (giving the civilized ones like her -such- a bad name) to sadistic immortals, to supernatural recovery groups, to someone who might be the Devil herself. What’s going on? Amanda aims to find out, but only if she can keep from damaging herself. Zombies don’t heal, and any injury can be messy, inconvenient, and downright upsetting to the psyche. And where the hell -is- that missing friend, anyway?

Happy Hour of the Damned is … well, unique is the first word that comes to mind. It’s Sex and the City meets zombies, as filtered through a truly deranged mindset. Foul-mouthed, shallow, even immature at times, the main characters are memorable for their sheer departure from the norm. Where else are you going to find zombies who call for pizza, and eat the delivery boy? And did I mention that the main character manages to think in footnotes? I have to be honest: half the time I turned the pages out of morbid fascination, the other half I kept reading to see just what sort of train wreck I was inflicting upon my psyche. That’s not to say this book is bad; on the contrary, it transcends bad and goes right into camp, offering up something refreshingly new and strange. I enjoyed it immensely, but at the same time, I was staring in mild shock as the story continued to go in unprecedented directions. (Hint: don’t ask about the trick involving chocolate cake and the bucket.) If I was to have any objections regarding this book, it would be the language: Amanda and her friends drop just about every obscenity available in the English language with casual carelessness, like toddlers who’ve been exosed to George Carlin way too early. In the grand scheme of things, I suppose that’s a mild thing to complain about. Seriously, Happy Hour of the Damned is unlike anything I’ve read lately, and I enjoyed it enough to definitely want to see what Mark Henry has planned next. It’s always nice to see a book that’s willing to challenge expectations, upset the status quo, and offend good taste, and this one succeeds on all levels.