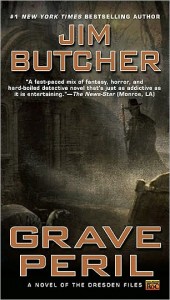 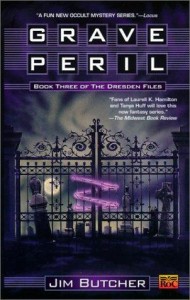 What do you get if you cross Sam Spade or Mike Hammer with a healthy dose of magic? Harry Dresden, the only practicing wizard in the Chicago Yellow Pages. He’s a private detective and wizard for hire who takes the cases no one else can, or will. Vampire stalking your girlfriend? Werewolves digging in the trash? Fairies stealing your dreams? Ghosts refusing to stay dead? He’s your man, and then some. And in a world where all of the above can and will happen, he’s one of the few things standing between the unspeakable terrors of the Nevernever and the unknowing public at large of the mortal world.

In his last few cases, he’s dealt with some pretty rough stuff. Demons, rogue wizards, werewolves of all kinds, and vampires. He’s been knocked around, beat up, smacked down, hit over the head, shot at, cursed, arrested, propositioned by seductively dangerous vampires, chomped on by any manner of nasty critters, and only just survived. You’d think a sane man would hang the ‘Gone Fishing’ sign on the door, and leave town. For good. But Harry’s not like that. He’s a hero, and heroes never give up. Not even when things get unspeakably bad.

Grave Peril pushes Harry to the very edge of his limits, as it continues to fill in his backstory, and flesh out his life. In addition to his skull-dwelling familiar and magical resource, Bob, he’s joined by Michael, a carpenter turned Knight of the Sword, a crusader for God’s will who wields one of the three great holy swords. It’s good, because Harry’ll need all the help he can get. Chicago’s been turned upside-down lately by a plague of restless, unpleasant ghosts, spirits, and spooks. The two are run ragged trying to keep things under control and send the spirits on to their deserved rest. And that’s just the tip of the iceberg.

Someone, or something, is intentionally stirring up these ghosts. It’s not the local vampires, some of whom have a real grudge to settle with Harry… is it? It’s not the wizard Harry helped bring to justice the other month… is it? It’s certainly not Lea, Harry’s treacherous Faerie (of the Sidhe variety) godmother, right? Whoever it is, they have reasons for raising havok with the dead and creating a Nightmare whose sole desire is to suck Harry’s power dry, and drive all his friends insane with spiritual torment. It’s gotta be personal.

Harry and Michael will both be tested to destruction, as the saying goes. With enemies on all sides, innocents falling victim left and right, and their enemies constantly one step ahead, it’s a sure bet someone’s dying along the way. They’ll brave the perilous etiquette of the Vampire Courts, make alliances with the people they least trust, risk losing body and soul and faith, and sacrifice the things they care for most, in order to see the world safe from the things which threaten it. Because that’s what good men do.

Once again, Jim Butcher turns in a fast-paced, breath-holding, stomach-churning mixture of pulp noir and urban fantasy. Harry’s the quintessential hard-headed hero, determined to do the right thing, no matter what the cost. He’ll risk anything for his friends, and keep going until he’s exhausted every potential, and can’t move. And even then, don’t count him out of the running. He’s Humphrey Bogart with magical spells, all tough guy with a heart of fool’s gold. Heaven help the nasty that harms someone he feels responsible for.

The plot is deftly twisted, leading us and Harry around all sorts of deadends and blind alleys, dangling clues all the way until, at the end, it all comes together in an unexpected manner. The dark and dangerous world Harry inhabits, not far removed from our own, is further explored, with the end result of leaving just enough unexplained and unresolved to make a fourth book in the series a distinct and hoped-for possibility. (In fact, I’m told that the fourth book, tentatively entitled *Summer Knight*, will further involve poor Harry in the intricate hostilities between the Summer and Winter Courts of the Fae, among other things. Holy Shades of War For The Oaks, Batman!)