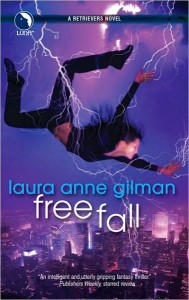 Life used to be -easy- for Wren Valere. She kept under the radar, and did her job as a Retriever, acquiring objects for people who didn’t care about cost or legality. But that was before things got messy. Before she fell in love with her business partner, Sergei. Before people started dying. Before a secret society known as the Silence declared open war on the Cosa Nostradamus – the equally secret society made up of magic users, or Talent, and the non-humans called Fatae. Before Wren became a leader in spirit, if not in name, of the Cosa. Before she lost Sergei due to his old affiliations with the Silence.

Now Manhattan is poised on the brink of conflict once again. The Silence, led by a corrupt leader, is ready to unleash a plan that will destroy the Talent and Lonejacks and Fatae once and for all, reclaiming the city for normal humans even as they use brainwashed Talents to do their dirty work. Wren, finally provoked into fighting back after she survives yet another attack, is determined to rescue the Cosa’s lost kin from the Silence’s clutches. Meanwhile, Sergei has a daring, dangerous plan of his own to undermine the Silence and save it from itself. One way or another, it’s all going to come together and be settled once and for all. Brace yourselves, a storm’s about to hit Manhattan, and in the worst blackout the city’s ever seen, dirty deeds -will- be done.

Free Fall is the fifth book in the Retrievers series, and Gilman pretty much kicks things up to eleven as she moves all of the pieces on the board towards the inevitable confrontation. Silence, Talents, Lonejacks, Fatae, and humans alike all have their parts to play as things get epically messy and the current story arc reaches its climax and conclusion. It’s a fast-paced story, as electrical and sharp as the current our heroine wields against her enemies, as raw and ragged as the emotions she experiences as Wren Valere goes through one of the worst times of her life.

Not that it’s all hard-hitting action, or blazing magical combat. Free Fall doesn’t skimp on the characterization or development, especially as Gilman looks as those closest to Wren and how events have affected them. From Sergei, whose conflicting loyalties are brought to a breaking point, to the demon P.B. who decides that now is the time and place to make a stand, to Bonnie, Wren’s friend and fellow Talent who can’t approve of the way things are going, to all of Manhattan’s Fatae, we see the cost of this war… and what they stand to lose if things go against them.

One of the strong points of Gilman’s setting here is that actions have consequences, and power has a price, and we see both of these things in full force. Everything Wren does causes a reaction, and everything the Silence does causes a reaction, and in some cases, those separate yet equal reactions end up feeding off one another. It’s almost ironic that at one point, the Silence realizes that they, in fact, provoked Wren into taking things further than she would have done ordinarily, thus bringing her wrath down upon them… and it’s their fault. Meanwhile, Wren taps into far greater power than she normally uses, and risks losing herself to the current, a much-feared fate known as ‘wizzing’ among the Talents. There’s a cost to using the level she does, and she may very well pay that price with her soul. Gilman’s not afraid to show us these costs, as both major and minor characters get taken off the board throughout the course of the series and the story. Change -happens-, and people grow, which is always satisfying in a series like this, where it would be tempting to maintain a certain status quo.

I really enjoyed Free Fall, like I have the rest of the series. It’s strong, enjoyable, complex stories like this which have made Harlequin’s Luna line more than just another romance imprint, and you can bet I’ll be eagerly awaiting the next book.