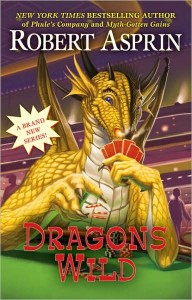 Griffen “Grifter” McCandles, occasional con artist and ace poker player, has just gotten the surprise of a lifetime. After graduating from college, he went to his uncle, looking for a job. Instead of a job, his uncle revealed a fistful of secrets. The first? That Griffen, like his uncle, and like his deceased parents, is a dragon, and he’s about to start coming into his true powers and potential. And unfortunately, due to his heritage, just about everyone involved in the complex game of dragon power and politics is going to want to subert him to their side, or kill him. And when it becomes clear that someone’s actually hired an infamous dragonslaying hitman named The George to take care of things, Griffen takes his little sister (also a dragon in the making) and takes the advice of an old friend, heading south to hole up in New Orleans.

There, Griffen joins a band of local dragon-blooded gamblers and criminals, making new friends and new enemies as he comes into his own power, and his destiny as a figure to be reckoned with. For it’s only natural for a dragon to seek out power and influence, and it seems Griffen’s one of the most powerful dragons (potentially) in the city. Now Griffen and his sister Valerie, and their assorted allies, have to work together as people come out of the woodwork to get a look at the new player in the game. From local police to Homeland Security, rival gangs to rival dragons, voodoo ghosts to people who can control animals, everyone’s coming to the table, and poor Griffen’s still learning the rules, and his own capabilities. To survive, he’ll need some dependable friends, and a whole lot of gamblers’ luck.

In the dedication to this book, which is billed as the first in a new series, Asprin states that it represents a radical departure from his usual style and subject matter, and that’s true. I primarily know him for his Phule’s Company and M.Y.T.H. Inc books, both of which are more comedic fare. Dragon’s Wild is a lot more straightforward urban fantasy, complete with the semi-standard trappings of a secret race of supernatural beings dwelling amongst, and influencing, normal people. But Asprin pulls it off with skill and style, delivering a thoroughly satisfying, energetic story that begs for continuation. In fact, it’s actually one of the best things I’ve ever read from him, in terms of entertainment and atmospheric value. Is it perfect? Probably not, but then again, perfection is a hard thing to gauge. Is it fun? Oh yes.

One of the strongest aspects of this book is the setting. Asprin writes with such glowing fondness and love for New Orleans’ French Quarter that it’s easy to envision the place. He captures the sights, sounds, smells, and tastes with enough passion that I’m tempted to book a flight for the locale as soon as possible, and in doing so, makes the setting an absolutely fundamental part of the story.

Griffen by himself comes off a little too good to be true. For someone described as a con artist and poker player, he seems to be an ideal hero: polite to his elders, respectful to his opponents, well-spoken and capable and always just a little baffled by the circumstances surrounding him. He’s likeable, sympathetic, possessed of acceptable morals (i.e. gambling good, drugs bad) and people flock to his banner, and rarely does he show any unacceptable vices. I know, it’s strange to complain about someone being too good, but that’s his biggest character flaw. Of course, as protagonists go, he’s a great deal of fun to follow. The chemistry he shares with his sister is delightful, the two of them making a great team whenever the chips are against them. As for the other assorted characters, Asprin has populated the book with a host of memorable individuals, a motley crew of somewhat sugar-coated gamblers, miscreants, and ne’er-do-wells who look out for one another like family. Asprin’s injected the setting and its inhabitants with a kind of happy fuzzy feeling, where people are bad, but even the bad guys (for the most part) have their good qualities, much as if Daman Runyan had been whispering in his ear part of the time.

The secret world of dragons and other supernatural beings is fairly well explained in this book, and we get to see a good portion of how things work, with plenty of potential left to be explored later on. I certainly enjoyed the tastes we got, from the explanation of how dragon powers work, to how they fit into the social structure, and how they relate to the other supernatural elements in the world. There’s a lot going on around the fringes, and New Orleans seems to be a great place for it all to blend together and overlap.

The plot is fairly linear, moving forward at a fast pace in a somewhat episodic manner as Griffen explores his powers, expands his knowledge, and settles into his new life as a dragon, all while trying to figure out how to stay alive.

All in all, I thoroughly enjoyed this book, and will be eagerly looking forward to the next in the series. Asprin’s clearly in his element with this new series.

(Reviewer’s note: After writing the initial text of this review, I actually had a chance to visit the French Quarter, and eat in some of the places mentioned in this book. Asprin doesn’t disappoint in his descriptions. And the burgers at Yo Mamma’s are to die for.)