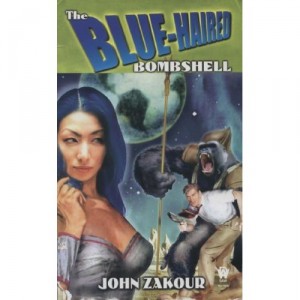 Zachary Nixon Johnson, the last freelance PI on Earth in the late 21st Century, is having a typical Tuesday. You know, attacked by killer plants, nearly killed by traffic while rescuing a heiress’s dog, stalked by an ad agency, menaced by genetically-engineered ogres… the usual. And then things get weird. And dangerous. It seems that the issue of the Moon’s independence has once again come up for vote before the World Council, which makes this an extraordinarily suspicious time for three of the Council’s most visible members to be assassinated by a powerful psi known for her Moon sympathies. Zach, smelling more than a few rats, decides to take the case, pro bono, and off to the Moon he goes.

There, he has to juggle all sorts of problems and potential enemies, including the Moon’s leader, Boris Sputnik and innumerable sexy blue-haired women with amazing psi powers. Oh, and intelligent, gun-toting augmented gorillas. And battle droids. You know … the usual. Luckily, Zach has a few aces up his sleeve, including HARV (the supercomputer who lives inside his head and acts as an assistant), GUS (his new user-friendly if somewhat experimental high-tech gun) and Carol (his annoyingly powerful psionic teenage assistant). It’s a good thing, too, because Zach will need all the help he can get, because the fates of the Earth and the Moon are up for grabs. Either he avoids all kinds of certain death, finds an assassin, foils a fiendishly apocalyptic plan and gets the world’s most uncooperative sisters to work together, or the entire human race will face extinction. The worst part of all this? He’s not even getting paid for the case.

The Blue-Haired Bombshell is the fifth in this humorous SF/Mystery hybrid series, and it’s safe to say that John Zakour continues to turn out a highly enjoyably, always weird story. He takes the very best clichés and tropes from the mystery field (especially the wisecracking, hardheaded, square jawed, fearless protagonist) and mixes them together with outrageous science fictional elements (psionic powers, genetic engineering, shuttles to the Moon, ray guns, talking gorillas, teleportation, weird aliens, and so forth), and spices it all up with some slapstick humor and a healthy dose of action. The end result is an oddly-entertaining tale with a pleasantly retro feel to it. You’ll never be able to accuse this series of being great literature, but for sheer unadulterated fun, it’s hard to beat. I always enjoy installments in this series, and Zakour’s still doing a great job of carrying it solo, after the departure of co-author Lawrence Ganem following The Radioactive Redhead. I will suggest that newcomers to the series go ahead and start with the first book, The Plutonium Blonde, as this book draws upon characters and situations introduced in the first four books of the series. All in all, this is good fun, and worth checking out.