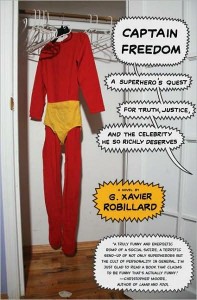 Who is Captain Freedom? From his humble beginnings as an impressionable sidekick named Liberty Bill, to his glory days as savior of the world, to his forced retirement and subsequent adventures, this tell-all book, recounted in his own words, peels off the mask to provide an intimate look at one of the world’s most popular (and merchandisable) heroes. We learn all of his dirty secrets, from just how he first became a sidekick, to how he earned that role as top-billed hero in his own right, to how he saved the world multiple times, and how it all came crashing down around him. From adopting a sidekick to finding his father, from the dreadful cat-tossing incident to his foray into politics, no subject is too personal, or too embarrassing. Captain Freedom may be one of the world’s greatest (and commercialized) superheroes, but under the costume, he’s only human (half-alien) and vulnerable like the rest of us. This is his story, and you’ll never look at superheroes the same way again.

Robillard, best known for his humorous contributions to sites such as McSweeneys and Cracked, turns his sights onto the post-modern superhero in his first novel, and the final product is something akin to an updated version of Robert Mayer’s SuperFolks. The heroes and villains of this world are far more interested in commercial deals and licensing packages than one usually expects of such people, and there’s a fair amount of bureaucracy involved in the whole thing. From academies where would-be heroes and villains are trained, to the tests which determine one’s future in the business, to the strange influence the comic book companies have upon the characters they portray, to the desperate way both heroes and villains go looking for archenemies, this is a world where fame and fortune take precedence over sacrifice and responsibility.

There’s an inherently quirky, goofy, surreal charm to the world inhabited by Captain Freedom and his friends and enemies. It’s irreverent and silly, made all the more so with the knowledge that these people, however exaggerated, are acting just like real people with powers would, looking to cash out, looking for fame, looking for that perfect nemesis to complete their lives. On the flipside, it’s hard to take the story that seriously. Often, it seems like there’s very little beneath the surface, as though Robillard’s going for the humor and provoking our laughs by pointing at the hero’s flaws and foibles. I get the feeling that if logic was applied to the setting, it would collapse under the weight of its own inherent absurdity. So one has to tread lightly and accept that this is a work of humor and satire first and foremost, a pisstake on the superhero genre as a whole. Perhaps that’s one of those obvious conclusions, but still, it’s worth pointing out. Captain Freedom is a heck of an entertaining read, and those looking for a more profound tale will do better to keep moving. This spandex-wearing crusader for justice is a flawed, neurotic individual one step away from a VH1 reality show and desperate to avoid that fate at all costs . . . which ultimately makes him just like every other celebrity, only with the ability to punch comets.

I liked Captain Freedom, but found the absurdist humor and its blatant mugging for laughs to fall short of my own laugh reflex most of the time. It entertained, even amused, but didn’t quite stir me to anything more profound, so take from that what you will.