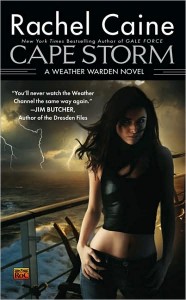 There’s a killer storm coming, and it’s headed right for Miami. To lure it away and prevent unimaginable destruction, Weather Warden Joanne Baldwin and her new husband, the djinn David, have amassed a small army of Weather Wardens and allies, and commandeered a cruise liner. Their goal: draw it away from land, and try to take the hurricane apart where no one will be hurt. And then find where the renegade Warden, Bad Bob Biringanine, has holed up with an army of his own, and shut them down for good. No problem, right? Wrong. Major problems. For starters, Joanne’s been infected with a Demon Mark, which is progressively seducing and corrupting her, a process which can only be slowed, not stopped. For another, Bad Bob has access to a substance which utterly destroys djinn. For a third, there are strange, unearthly things hiding on the cruise ship, wearing stolen bodies and waiting for the right moment to strike. And for last, the hurricane refuses to be stopped. When Joanne fails and falls to the dark side, she’ll discover just how bad things can get. What will success cost her and her allies this time, and is it too late? Some wounds never heal….

We’re now eight books into what Caine has described as a nine book storyline, and while Joanne and the others have been through a lot already, this book pushes the limits once again, and alters the status quo in a way that may or may not be recoverable. We’ve seen Joanne die and come back, lose her memory and regain it, become a djinn and return to human, so it’s anyone’s guess as to how these latest changes will stick. It’s interesting all the same to watch the author put her cast through the wringer, even as she invents new and interesting ways to ramp up the tension and the stakes. And believe me, things get pretty intense here.

I doubt many people are going to be leaping on at this point without having read one or more pf the previous releases, but Caine makes it easy to get caught up to speed, providing a quick summary of the major events that have shaped the series thus far. It’s not an ideal jumping-on point, but it’s passable. As for fans who’ve kept up with things all along, they’re bound to be satisfied with this entry. It takes everything we’ve learned to date, and kicks it up a notch. I’m both anxious to see how the series (or at least the overarching plotline) wraps up, and sad to know the end is almost within sight. Cape Storm is another excellent entry in a series that’s been consistently enjoyable all along.