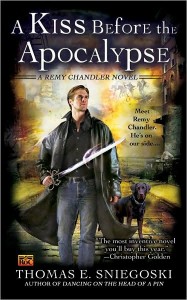 Meet Remy Chandler, P.I. Unlike ordinary detectives, he can turn invisible, speak any language, and read thoughts on occasion. And while he appears to be human, he’s not. Once upon a time when the world was young, he was the angel Remiel, but that was before he fell in love with humanity, and abandoned his former job for a more fulfilling life here on Earth. Unfortunately, he’s coping with the tragedy of outliving those he cares for, as he watches his wife, who he met decades ago, draw close to the end of her lifespan. But even an angel-turned-private investigator has bills to pay, so Remy takes on what he thinks is your average case of a philandering husband. When a simple stake-out leves him as witness to a bizarre murder-suicide, Remy’s soon dragged into a case unlike any he’s ever worked before.

It seems that the Angel of Death has gone missing (or gone native like Remy did) and with him, the scrolls of the Apocalypse have up and vanished as well. Now Remy’s former coworkers, the Seraphim, want to hire him to find the wayward Israfil and retrieve the scrolls before things get messy. However, with no Angel of Death, there can be no death, and Remy finds the idea of preventing his wife’s death to be … tempting. On the flip side, there’s every indication that someone’s after those missing scrolls in order to break the seals and call forth the Four Horsemen, to destroy the world and wipe it all clean.

Looks like Remy Chandler’s on the job, for better or for worse, and no one and nothing will stop him from seeing it through to its completion. Not even the mustered forces of the dreaded Black Choir, or treachery from a supposedly trusted ally, or the Apocalypse itself will prevent him from doing his job. Unfortunately, it may just cost him his hard-won humanity, as circumstances may require him to dig deep and unleash his long-buried true nature. It’s a heck of a job, but he’s just the angel to do it.

I’ve seen just about every kind of supernatural/paranormal P.I. there is, from vampire to sorcerer to robot, and yet there’s always room for a new variation on an old standard. In this case, it’s Thomas sniegoski and his clever, skillful interpretation of a world-weary angel who became a detective because of his fondness for Raymond Chandler’s works. Remy Chandler is memorable, sympathetic, and fascinating, an immortal who willingly locked away his powers and potential in order to walk among ordinary humans because it was far more appealing to him than staying an angel. He’s your archtypical hard-headed, suicidally stubborn, two-fisted hero, though he fights off Hellspawn rather than mobsters, and his missing people might just bring about the end of the world. Sniegoski populates Remy Chandler’s world with some interesting characters, including a still-living Lazarus (yes, -that- Lazarus), the decadent renegade faction of angels known as the Grigori (the moral opposites of Remy in many ways) and Francis, an angel who now runs a halfway house for redeemed sinners released from Hell on parole. It’s an intriguing world, obviously drawing heavily from Judeo-Christian mythology for its inspiration (though admittedly taking liberties as necessary) without being preachy or overtly religious. Points to the author for treating the source material like any other collection of myths and tales. After all, the territory covered by the Christian mythos is usually such a touchy subject (where the Greeks, Romans, Norse, Celts, and so on are perfectly fair game), so it’s nice to see it used in such fashion. It’s clearly respectful, and at the same time entertaining.

The plot itself is fairly strsightforward, though there’s more than one surprise in store for Remy and reader alike as the hero gets to the bottom of the mystery of the missing angel, and attempts to prevent a premature Apocalypse in the bargain. However, the real emphasis is on Remy’s internal conflict: remain as human as possible, or sacrifice his own happiness to save the world. I think this is a great start to what’s hopefully a new series, and I hope it won’t be too long before we see Remy Chandler again.