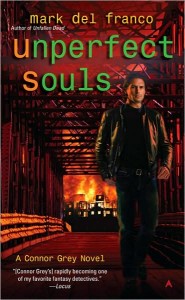 Ever since Connor Grey kind of helped destroy the passageways between Earth and TirNaNog, dead Fey have been walking, unable to rest. But even the Dead can die, and when one of the Dead turns up without a head, it’s cause for concern. Decapitation = dead for good, for keeps, really, we mean it this time. As Connor helps his cop pal Murdock look into this mysterious murder, he finds himself poking into some very dark places. But at the same time, he gets ever-closer to discovering just what sort of magical oddity has taken up residence in his head and blocked the majority of his druidic powers. Hellhounds, politics, corpses that won’t stay dead, ex-girlfriends, current girlfriends, and much more all tie together, with a dangerous conspiracy providing the thread which connects them. And of course, it all comes down to Connor Gray to save the day.

As always, del Franco turns in a riveting mystery set against a fascinating setting, where the Fey have gone public in a big way and are divided into several diametrically opposed camps competing on a political and mythological level. The factional in-fighting and intrigue, and how it all trickles down to affect the average Fey on the street and the humans who share the same space helps to enhance the complexities of this series. Unperfect Souls picks up after Unfallen Dead, exploring some of the ramifications and twists we saw come into play there, while adding a whole new set of problems. We also see more explanations and progress into the mystery of Connor’s crippled magic, and he comes ever closer to putting together the pieces of an unfathomable puzzle.

Always entertaining is the nebulous relationship Connor has with the enigmatic, mercurial Meryl, who keeps him on his toes more often than not, and the close friendship he has with mortal cop Leo Murdock, who helps keep him grounded. It’s those moments of genuine interaction which help make the characters relatable and memorable in a sea of murder, magic, mayhem and politics. I’m really looking forward to the day when all is revealed and we can see the big picture at last; here’s hoping del Franco doesn’t string it out too long. I want nothing but the best for Connor and his friends. All in all, this is a perfectly entertaining urban fantasy, building on the first three books in the series while pushing towards some larger goal down the line. It may may be a little too wrapped up in its internal structure to act as an entry point for new readers, but existing fans will certainly enjoy it.