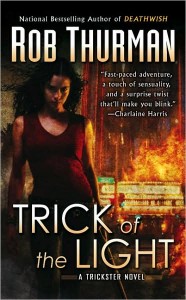 At first glance, one might think Trixa Iktomi to just be a Las Vegas bar owner with dead brother issues and a penchant for burning down a certain demon-run nightclub. One might even think she dabbled in demon-slaying, with the help of a rather unusual pair of friends. And those surface appearances would be correct. But Trixa is much, much more, and the true depths of her complex nature reveal themselves slowly over the course of current events, as Las Vegas becomes a secret battleground over an ancient mystic artifact.

The Light of Life pretty much guarantees safety and victory to whoever possesses it, which means the forces of Heaven and Hell are both eager to get their hands on it. When Trixa, a professional dealer in information, gets a lead on the Light, everyone’s out in force to ensure her cooperation, at any cost. Angels and demons alike infest her life, only to learn that Trixa Iktomi has her own unique way of dealing with people – and beings – who annoy her. Moreover, she has friends, including the trigger-happy telepath Zeke and the empathic Griffin, two young men who live to kill demons and fight evil. Along with her bartender/best friend Leo, Trixa’s ready to take on just about anyone. Even Solomon, the most powerful demon in Las Vegas, and Mr. Trinity, the local Earthly leader of Eden House, a Heaven-influenced organization. But what is Trixa’s master plan, and who’ll be laughing when the dust clears?

In Trick of the Light, Rob Thurman starts a new series, one only tangentially connected to her current series about the brothers Leandros, and here we’re introduced to almost completely new facets of the complex supernatural world established elsewhere. Here we see how angels and demons fit into the overall mythos, and how wild cards such as psychic mortals and sneaky immortals affect the balance of things. Thurman proves quite adept at spinning out Trixa’s story and nature over the course of the book, peeling back layers to constantly reveal something new about her and the world she inhabits. It’s an impressive feat, especially when we get to the end and certain things can be seen in an entirely different light. Knowing up front that this is billed as the first in the Trickster series doesn’t quite prepare the reader for the sheer brilliance of some of the revelations and plot maneuverings.

While I absolutely loved the overall story, I did find Trixa’s internal tone and narrative to be occasionally grating, even overwrought, which impacted my ability to throw myself into the thick of things. It fits the character, but it could have been toned down and still been quite effective. Zeke and Griffin reminded me quite strongly of the Leandros brothers from the other series, to the point where I occasionally confused them mentally. These are minor issues when weighed against my overall enjoyment, however. The jury’s still out on just how unreliable a narrator Trixa is, given that everything we know is filtered through her, including her background, motivations, and true nature. Is it playing fair for us to be in her head and still not made privy to the truths she knows? Or does she lie to herself just to keep her secrets safe? There’s an interesting line of questioning that may be answered on another reading, or in future books.

I have a particular fondness for tricksters, and I was quite pleased with the overall effect of this book, and I’ll definitely be back for Trixa’s next adventure. Thurman’s more than earned my repeat business.