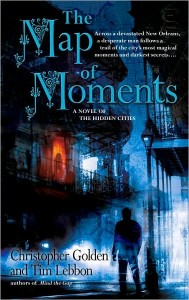 Ten weeks after Hurricane Katrina devastated New Orleans, Max Corbett, a history professor who left the city never to return, is drawn back nonetheless, for the funeral of the girl he once loved. It doesn’t take him long at all to realize that while he might have loved Gabrielle Doucette, he hadn’t truly known her. A chance encounter with a mysterious old man following the sparsely-attended funeral is Max’s first step along what will prove to be the strangest, deadliest journey of his life. He’s given the so-called Map of Moments, a piece of magic which transports him back in time to witness a series of inexplicable, significant events throughout New Orleans’ history. Individually, the moments are terrifying and filled with dark magics; together, they describe the long and dark history of the Tordu, a secret society whose very existence is tied into the city’s soul.

The closer Max gets to the center of the mystery, the more dangerous it becomes. For the Tordu guard their secrets jealously, and there’s far more going on than Max ever expected. And he still doesn’t understand how Gabrielle was involved, or what he’ll comprehend when his journey is finished. All he knows is that he’ll never be the same again, nor will New Orleans.

The second in Christopher Golden and Tim Lebbon’s Hidden Cities series, The Map of Moments draws from the aftermath of a tragic moment in recent history, telling a dark, gripping story set in a shattered but unbeaten New Orleans. Max’s journey through the hurricane-ravaged streets of the present and the hidden mysticism of the past provides a fascinating look at a city that’s not all jazz and beads. Part ghost story, part thriller, it doesn’t pull any punches along the way, putting the hero through a physical, mental and spiritual ordeal even as it paints an honest, stark picture of a city just starting to recover from a near-fatal blow. The Map of Moments isn’t about New Orleans as it’s traditionally depicted; there’s no Mardi Gras excess, no jazz on the street corners, no partying in the French Quarter. This is about the undying, unbroken spirit of the city, that stubborn, iron core remaining after everything else has been stripped away. It’s about survivors, those who’ve been transformed by what they’ve done to stay safe and alive, and those who understand pain and loss. It’s a ghost story, where memories of the city as it was haunt the city as it is, with one poor accidental hero caught right in the middle. It’s a love story, the kind that always ends with a broken heart.

Christopher Golden and Tim Lebbon really deliver a hell of a harrowing tale here. It’s dark and intense, full of pain and anguish, and the New Orleans that acts as the backdrop here is one a lot of people undoubtedly aren’t familiar with, and yet, this New Orleans is just as real and vital as the image presented to the tourists. They do an excellent job of making the city itself the true protagonist, even as they infuse the setting with tragic ghost stories and other shadowy aspects of a hidden, magical past. There’s a lot to think about here; it’s not your average urban fantasy by any means. The ending is somewhat abrupt, and it feels as though a few more pages could have been used to soften the conclusion a little. Nevertheless, it’s a great read, illuminating a time and place in American history that should not be ignored or forgotten. As with the previous book in the series, Mind the Gap, I greatly enjoyed this and I’ll be looking forward to future installments, especially if Golden and Lebbon continue to make the setting the true star of each book. I know I’ve got a wish list of places for them to utilize. This is definitely worth checking out if you like dark urban fantasy.