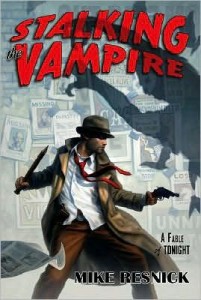 It’s All Hallow’s Eve in the bizarre alternate Manhattan where private detective John Justin Mallory has established himself over the past few years. He and his partner, the renowned hunter Winnifred Carruthers, are looking forward to the festivities. That is, until Mallory discovers that someone of a vampiric persuasion has been snacking on Winnifred, and said someone turns out to be her recently-arrived nephew. Well, that sort of thing just won’t do, and the two of them set out to find Rupert before he can get into any more trouble. Things being as they are in a city where all things bizarre, magical, and unnatural flourish, finding a lone vampire-to-be isn’t the easiest task… even after he turns up dead for good.

Now the hunt is on for the vampire who originally bit, and subsequently killed, poor Rupert. Mallory, with the office catgirl Felina in tow, begins a lengthy trek through the streets and lairs, clubs and blood banks of Manhattan, searching for the bloodsucker behind it all. Along the way, Mallory picks up Bats McGuire, who may just be the worst vampire ever, and Scaly Jim Chandler, a dragon noted for his sex- and violence-filled detective novels. Dodging goblins bent on selling them anything that can be sold, bribing morticians and hotel clerks for information, outwitting vicious gangs of magical riffraff, Mallory and his unlikely companions have until dawn to stop an ancient vampire before he kills again. Luckily, Mallory isn’t easily frightened by the things that go bump, thump, or splat in the night.

Stalking the Vampire is the sequel to Stalking the Unicorn, the adventure which first saw Mallory set up shop in this particular world, and the cast is in fine form here. Mallory, the quintessential hardboiled, wisecracking P.I. is in his element as he follows lead after lead, tracking down an elusive vampire in a city full of vampires, leprechauns, trolls, dragons, goblins, and magic gone awry. His companions are well-defined, quirky, and downright loony, from the fish (and elephant) obsessed catgirl Felina, to the self-absorbed, cowardly Bats McGuire, to the delusional writer-of-pulp-fiction Scaly Jim Chandler. Toss in any number of memorable background characters who engage our heroes in snappy patter, sharp retorts, quick non sequiters and sleazy sales pitches, and you have the sort of story where every page has something of an oddball nature going on. It’s a past-paced story full of left turns and the occasional loop-the-loop, keeping things moving at a brisk pace.

I’m going to go out on a limb and say that this book is easily the funniest bit of fantasy detective fiction I’ve read all year. Mike Resnick is a master of rapid-fire dialogue and comedic timing, and he applies these techniques to great effect here, as the characters exchange comments and replies one after another, building through patterns and repetition, topping it all off with unexpected segues or abrupt terminations. It’s very vaudeville in feel, and Mallory’s frequent exchanges between his various companions become almost routine as they stalk their prey throughout the course of the night. Interspersed with those are encounters with goblin hucksters, willing to sell any and everything one could ever have absolutely no use for, which leads to some truly bizarre moments along the way. Suffice it to say that between the dialogue and the sheer absurdity that permeates the setting, Stalking the Vampire is a perfect example of humorous fantasy at work.

My only complaint regarding this book is that it was released in hardcover, and tops out around 260 pages. It’s a quick read, a fast-moving story that’s over way too quickly for my tastes, and I’d have loved to spend more time in Mallory’s world. I guess for the meantime, I’ll have to be satisfied with rereading Stalking the Unicorn and tracking down the short stories featuring these characters (one of which appeared recently in an anthology edited by Resnick and Eric Flint, The Dragon Done It.)

If you happen to be looking for a comedic blend of fantasy and mystery, you can’t go wrong with Stalking the Vampire. It’s a well-told story with a solid plot, excellent characterization, an entertainingly strange setting, and plenty of laughs, worth the price of admission.