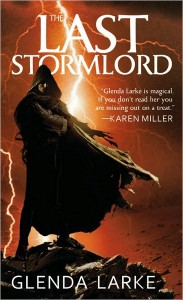 Ever since she was sold as a child, Terelle has worked as a servant in a brothel, dreading the day she’ll come of age and have to start earning her keep in a manner she finds distasteful. Dreaming of escape, she seeks out alternatives, only to discover there’s very little opportunity for one of her low station. Ultimately, she runs away, finding refuge with an eccentric artist, who teaches her the secret of painting with water, and influencing the future. But the longer she stays, the more she learns, the more she questions her decisions, and her safety.

Shale’s village is among the poorest and most remote in the dry, hardscrabble Gibber Quarter, where water is beyond rare and survival is never easy. When his magical ability to sense and control water is discovered, he becomes a pawn in a deadly political game which seems destined to upset the status quo of the Scarpen once and for all.

In an area of the world where every drop of water is carefully rationed, where those who control water possess the greatest power of all, and where entire cities rest on the ability of the Stormlord to conjure up storms from the ocean and deliver them as needed, it doesn’t take much to upset the delicate balance. And when the Stormlord grows weak and close to death, the time is perfect for someone both ambitious and unscrupulous to make his move. And in the chaos, Shale and Terelle will come together, only to be caught in the middle of war and suffering. The Scarpen will never be the same again.

Epic, sprawling, taking place over a number of years, this isn’t a story to be summarized easily. Each individual story spans the better part of a decade, and to detail even a small portion would spoil more than I feel reasonable. So take it from me when I say there’s a lot going on here, and it’s a densely-plotted, multi-layered book that doesn’t make for easy or casual reading.

The setting itself is quite interesting, though with just about every page having some reference to water or its scarcity or the magical manipulation thereof, it gets repetitious after a while. I was intrigued by the tiered cities with their elaborate systems of gutters and aqueducts and social systems determining who gets water and who doesn’t, and I was certainly interested in the plight of the Gibbers, who get their water as leftover gulley washes. I followed the various characters with interest, and enjoyed seeing how their various threads finally came together as the story continued.

And yet, for all the pretty language and unusual setting, I found this book to be something of a slog, an effort to get through. I ultimately got through the close-to-700 pages out of sheer bloody-minded determination, wanting to see just what happened at the end, only to learn that the story’s nowhere near finished. While I certainly have nothing against big epic books, it’s possible that this one might have benefited from some trimming or splitting up. While I liked The Last Stormlord, and it’s a perfectly good epic fantasy as these things go, it didn’t resonate with me as much as I’d hoped. Even though the various plot threads should be resolved in the sequel, I’m still up in the air about whether or not I’ll be along for the ride. Good stuff, but not entirely my cup of tea.