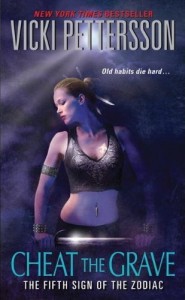 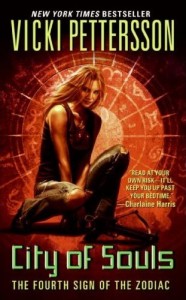 The secret war between the Zodiac troops of Shadow and Light continues unabated, with Las Vegas as both battlefield and prize. As always, stuck right in the middle is Joanna Archer, whose uniquely mixed heritage casts her as a prophesied agent of change and destiny. Transformed into the exact likeness of her murdered socialite sister Olivia, she’s living under the noses of her greatest enemies, one step away from discovery at all times.

In City of Souls, Joanna discovers the existence of Midheaven, a legendary realm that’s both refuge and prison for those desperate enough to seek it out, where powers and abilities are bartered at the poker table, and where no secret stays safe for long. Every visit costs her more of her soul, but if Joanna wants to save an innocent life, she must risk it all. Unfortunately, there’s far more at stake than she realizes, and the dangers of Midheaven are greater than she expected. To achieve her goals, she’ll have to sacrifice everything.

In Cheat the Grave, Joanna is down and out in Las Vegas. Her powers are gone, expended in her attempt to right a grievous wrong. Her lover, the Light warrior known as Hunter, has been revealed as a traitor and exiled to Midheaven. Her own troop has disowned and expelled her. Sadly, even as a mortal, even masquerading as her beautiful, rich, popular sister Olivia, Joanna can’t catch a break.

The psychopathic Mackie has escaped from Midheaven, determined to kill her and anyone who gets in his way. As the body count increases, with no help coming from her former friends, Joanna reluctantly joins a band of rogue agents, those who claim allegiance to neither Shadow nor Light. Powerless and unsure how far she can trust her new allies, Joanna will need all of the creativity, bravery, and luck she can muster, especially since both Shadow and Light want her dead now. But when everything comes to a climax, she’ll make a bizarre discovery that could change her life forever… if she survives.

The first trilogy in the Signs of the Zodiac series was focused on setting up the general mythology of the world, with its superhuman heroes and villains fighting one another for secret control of Las Vegas. However, with these, the fourth and fifth books, there’s a distinct change in tone and trappings. The addition of the hidden realm of Midheaven and its manipulative mistress Solange, along with its population of outcasts and renegades, gave the world another layer of weird appeal. The removal of Joanna’s powers and her subsequent journey of self-discovery has helped the series’ protagonist to grow and evolve, even as she tries to figure out just what her role in the grand scheme of things really is. The introduction of the so-called Grays, rogue superhumans fighting for survival against all comers, provides tangible proof that this really isn’t a story of absolutes. What seemed to be black and white in the beginning has been revealed as something much more complex and ambitious.

Only time will tell if these changes will help or hinder the overall progression of the story. It’s certainly an interesting ride thus far, and it’s anyone’s guess as to where Vicki Pettersson plans to go. With City of Souls, she proved willing to upset the status quo, and in Cheat the Grave, she really unloads some major surprises and plot twists/developments. If just for the sheer unpredictability of it all, I can’t wait to see what happens next.