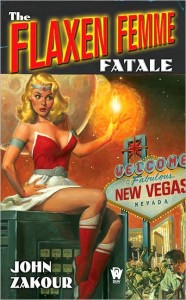 Good news: No one has managed to kill Zachary Nixon Johnson, the last freelance P.I. on Earth yet.
Bad news: It’s still early.

That’s about how you can sum up any day for our hero. And when a mysterious woman appears in his dreams and asks him politely not to try and find her, he’s surprised… but only a little. And when the military summons him to try and find their missing secret weapon, an impossibly-dangerous psychic named Natasha, who just happens to look like his earlier visitor, Zach has no choice but to take the case. Even though the death threats and assassination attempts start almost immediately. From laser-eyed librarians to battlebots, upstart slot machines to mind-controlled military, it seems like everyone’s out to get him. And that’s before Natasha literally turns the entire world against Zach as a small demonstration of her power and desire to be left alone. But does that stop him? Of course not.

Armed with GUS, a gun with a mind of its own, and HARV, a supercomputer who uses Zach’s mind more than he does, Zach sallies forth against all odds. Not even (temporary) death is enough to stop him from trying to find a solution that makes everyone happy, especially Natasha (who, like Greta Garbo, only wants to be left alone and not used as a superweapon anymore). From the New San Diego New Convention Center (home of the Comic-Con) to the UltraMegaHyperMart Grand Canyon, from New Vegas to a secret orbital station, Zach Johnson is on the case. And hardly anything has blown up. Yet. Lately. But things can change.

I’m always glad to see new books in this series come out, as there’s a serious deficit of comedic hardboiled science fiction adventures on the market, and John Zakour has filled that niche quite adeptly. It’s goofy, it’s quirky, it’s iconic in its own way, and it’s way too much fun. Like the rest, The Flaxen Femme Fatale borders on parody, but maintains enough good-natured charm to maintain an air of legitimacy. It may be a world full of robots, psychics, aliens, genetically-engineered superhumans, and wacky technology, where anything is possible, but it has the internal consistency and earnestness required to sustain such a setting.

There are a few elements which grate on the reader after a while — the usage of DOS, Gates, and Windows as swearing and exclamations comes to mind — but in general, there’s very little to complain about here. It’s exactly what it makes itself out to be: another exciting episode in the career of Zachary Nixon Johnson, the last freelance P.I. on Earth… and it’s particularly fitting that his adventures have turned him into a media figure and a cultural icon in his world, even as they entertain us in ours. Here’s hoping the next book shows up soon.