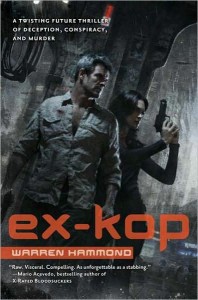 Juno Mozambe is a bad man on a bad planet. Formerly the leg-breaker and chief enforcer for Paul Chang, the ruthless chief of the Koba Office of Police, he was forced into retirement after things went sour in a big way a short time ago. Now he acts as a private investigator, taking nasty cases involving even nastier people, all of his money going towards hospital bills to help heal his grievously-hurt wife. Under Juno and Paul, the Koba police might have been dirty, but at least they were controlled. With them out of the picture, the authorities on Koba are corrupt, unprincipled, and undependable. But Juno’s ex-partner Maggie Orzo is a bright spot amidst the chaos, one of the few honest, decent cops left… and she needs his help on a case.

Juno flatly refuses to be part of any attempts to clean up the system. He’s been there, done that, and has the scars to prove it. But he gladly takes the money to investigate a horrible series of murders, in which people are being brutally tortured and killed. Juno suspects that offworlders are involved, which is never a good sign. After all, offworlders mean nothing but trouble. And the deeper Juno gets in this case, the more he gets sucked back into a world of corruption, treachery, abuse and danger. Because now he’s gained the attention of Maggie’s new partner, a steroid-abusing monster named Ian Davies, and his band of vicious cronies, some of the worst cops in the city. Now Juno’s playing a dangerous game for survival, trying to keep Ian from killing Maggie or himself while he gathers the information he needs, the information which will crack this case once and for all. But with Juno’s wife in the hospital, his greatest weakness lies exposed, just when he needs to be at his hardest. On Koba, it’s damned hard to be a good person. Luckily, Juno Mozambe is anything but good.

Ex-KOP is a dirty, gritty, squalid story, noir carried over into a science fiction setting. On Koba, it’s always raining, and the dichotomy between the haves and have-nots is in sharp evidence. It’s a brutal little bit of civilization carved out of an uncaring jungle, and the author goes all out to evoke that sense of darkness and ugliness all around. Juno is the sort of hero the setting deserves, a brutal thug beaten down by time and circumstances, fiercely clinging to the few points of light in an otherwise bleak existence, attempting to believe in something that will make it all worthwhile in the end. Outgunned, outnumbered, and an easy target for the younger, nastier crowd that has sprung up as he has aged, he has to fall back on cunning and experience, rather than brute force and a gun. And yet he never gives up, not entirely, even as things really get bad.

This is not a pretty, shiny, feel-good book. It’s very much the story of a struggle for dominance and the fight to maintain some small sense of decency when it has been just about beaten out of everyone. It’s a two-fisted murder mystery with noir sensibilities, a high-tech ambience and a science fiction setting, and a hell of a read. It’s certainly not for everyone, especially the squeamish, but Warren Hammond really does a good job of telling the story at hand, and I’ll definitely be picking up the next in the series. Do keep in mind that this is a sequel to his first book, KOP, so start there if you get the chance.