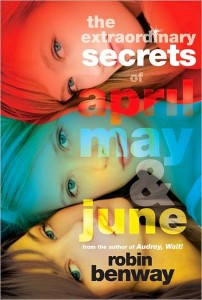 When their parents divorce, April, May and June remain with their mother, moving from Orange County out to the Valley. Think fitting into a new school is hard? The three sisters have to cope with amazing psychic abilities, spontaneously emerging after a decade’s dormancy. April, the tightly-wound oldest, is now a precognitive, receiving all sorts of unwanted (and often confusing) visions of the future. May, the wild child middle sister, can become invisible, reflecting her internal turmoil. June, the youngest, can read minds. Keeping these abilities a secret from everyone else, they try to assimilate into their new school, making friends, meeting guys, going to parties, often with unpredictable results. It’s easy to slip into a clique when you can hear their thoughts, tempting to ditch school when you can avoid detection, and unsettling when you know for certain who you’ll date before you even meet him. But when April’s visions turn terrifying, she has to figure out how to prevent tragedy, and she’ll need the help of her sisters.

Benway does a great job of injecting a normal high school atmosphere with that something extra; who hasn’t wished they could see the future, read minds, or vanish when things got too confusing? The sisters have a believable relationship, and their reactions to having and using their powers are appropriately realistic. The rotating cast of first-person narrators, each with her distinct voice, occasionally gets a little grating at times, but in general, this is a genuinely entertaining, feel-good tale of familial ties and super-powered teenagers.