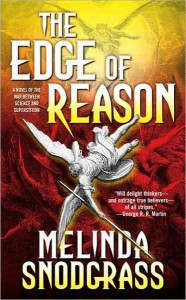 There’s a saying: no good deed goes unpunished. Richard Oort, an Albequerque cop, is about to learn this the hard way, when his rescue of a teenage from from a group of inhuman attackers drags him into the middle of a shadowy war. For as long as humanity has existed, two factions have fought against one another for the hearts and souls of mankind. Representing science, rational thought and techology are the Lumina, led by a man named Kenntis. Their opposite numbers are the Old Ones, who work with magic, superstition and religion. Both sides want Richard, one of the very rare people born without any trace of magic, a condition which makes him valuable for a number of reasons. And both sides are willing to go to extremes to secure his services … or neutralize him.

After signing up with the Lumina, Richard undergoes a series of trials and experiences designed to push him to his limits and beyond, as he struggles with his faith, his sexuality, his past, and his future. His only allies in the matter are an unpredictable teenage sorceress, an attractive coroner who wants to be more than a friend, and a homeless god with multiple personalities, as well as the enigmatic Kenntis. Arrayed against him are a host of monsters, demons, and fallen gods. If Richard Oort wants to survive, he’ll have to come to terms with the events that shaped him, and find his new place in the world. If it doesn’t kill him, first. He’d better watch out, because betrayal is close at hand.

The Edge of Reason is a strange book. Billed as “a novel of the war between science and superstition,” it’s a tale of good versus evil where neither term is easily defined. It’s rational versus irrational, light versus dark, past versus future, and faith versus facts.
What exactly is one to make of a book where the good guys are led by someone who might be Lucifer, Jesus Christ is a homeless immortal suffering from multiple personalities thanks to the infinite ways he’s been perceived and worshipped over the years, and the fate of the world rests in the hands of a young cop trying to escape his past?

It’s an intriguing concept, that’s for sure, and Melinda Snodgrass really takes a determined stab at making it work, really getting into the heads and hearts of her characters. You can really feel the pain and anguish as Richard struggles through the crisis of faith sparked by the revelations he’s force-fed in the early parts of the book, and the crisis of sexuality he faces when he starts getting close to Angela, a coworker who bullies her way into his circle of confidantes and allies. It’s also interesting to see how Kenntis, Angela, and Rhiana – a headstrong teenager with a knack for magic – approach the plot in their own ways, for better and for worse.

I will argue that this book seems to have some odd pacing issues, and in no way is this more evident than in the subplot concerning Richard’s sexuality and traumatic past. We’re granted little hints here and there for much of the story, and then, when a revelation is made two thirds of the way into the book, it blows up and becomes a big deal, with issues going from 0 to 60 in the space of a few pages. It seems to me that this could have been spread out just a little more, so it didn’t feel disproportionately weighted against the latter half of the story. Furthermore, the ending seems somewhat abrupt, leaving several major plot threads dangling for what’s obviously a sequel in the works.

That said, I’ll admit that I really enjoyed this book. It’s thought-provoking and certainly memorable, with an intriguing concept and a cast of characters begging for further exploration. I’d love to see more of this world, and the beings that make up the Lumina and Old Ones. Clearly, there’s a lot to be told here. The Edge of Reason is one of those high-concept books that tries to push the boundaries, making for something beyond the usual urban/dark fantasy. Does it succeed in pushing those boundaries? I’ll let the reader decide. It certainly gave me some thingas to think about, and I’ll be picking up the sequel when it appears, so I can find out what happens next in Richard Oort’s saga.