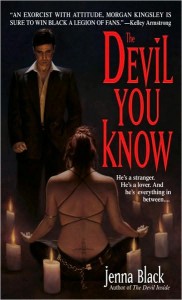 Freelance exorcist Morgan Kingsley has demon problems like she never expected. To her immense annoyance, she’s the unwitting host for Lugh, exiled king of the demons, who’s using her as a refuge while a power struggle in the Demon Realms shakes itself out. Luckily, Lugh hasn’t possessed Morgan, body and soul, like most demons do when they take a mortal host. No, he only shows up in her dreams, where he’s both a distraction and an enticement, neither one of which she needs in an increasingly-complicated life. Her brother, Andrew, was possessed until recently by Raphael, Lugh’s brother, but with Raphael returned from whench he came, Andrew’s in a coma with no signs of improvement. Things get worse when Morgan learns that the demon equivalent of a sociopath, The Hunter, has been released on Earth in order to hunt down Morgan, aiming to kill her and destroy Lugh at the same time. The Hunter will stop at nothing to get its target, and Morgan’s friends and family are right in its path, as victims or hosts. Worse still, Morgan’s just learned things about her family and heritage that she never even dreamed possible, things which cast her entire reason for being into a new light. Now Morgan has to defeat The Hunter, confront her parents, protect everyone she cares for, and still make a living, all while keeping anyone from learning about the demon in her subconscious. And no matter how hard she tries, someone’s getting hurt.

The Devil You Know is the sequel to The Devil Inside, continuing the story of a demon-hunting exorcist forced to coexist with the things she hates, fears, and distrusts the most. It’s a strong, fast-moving story filled with plenty of action and character moments. Morgan’s stubborn refusal to change or adapt when it comes to demons does wear thin after a while; I lost count of the number of times she could have made things easier for herself if she extended even a shred of trust, or a kind word, to people clearly trying to help her. Maybe that’s just how the character is, but after a while, it gets repetitive, especially after the multiple learning experiences she ‘enjoys’ as a result. The relationshsips between Morgan and the other characters are interesting, especially with Adam and Dominic, the sado-masochistic gay couple that act both as allies and occasional foils to Morgan’s plans. The two men attract and repel her in turn, mostly because of their willing demon possession (current for Adam, former for Dominic), partly because of Adam’s love of dealing pain to the willing, and it’s fun to watch Morgan struggle with her conflicting attitudes.

All in all, I’d have to say I enjoyed The Devil You Know. This series is fun, with plenty of action – Morgan Kingsley is an asskicking heroine when she cuts loose – and mystery, with bits of romance seeping through at the edges. One might see Morgan and Lugh getting together in some fashion someday, but she’d have to lose a lot of attitude first. Wherever Jenna Black is going with this series, it’s bound to be enjoyable in the end. I’ll be back for the next installment.